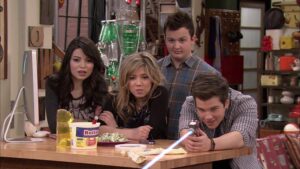 Both streaming platforms Netflix and newly launched service Paramount Plus are proving that sometimes the best new material is the old. Both are trying to squeeze new life out of fan-favorite “iCarly.”

On one hand, bringing back the show helps Netflix cater to family-friendly content and promote the show to newer audiences. But with the rising monthly subscription price and other well-loved shows leaving, the lack of episodes readily available has elicited mixed feelings from Netflix and Nickelodeon audiences.

“iCarly,” which aired on Nickelodeon from 2007 to 2012, racked up a total of 97 episodes in its original run. It follows Carly Shay (Miranda Cosgrove), a girl who decides to turn her life into a viral web show, alongside her friends Freddie (Nathan Kress), Sam (Jennette McCurdy) and more.

After Netflix released the first two seasons of the show, it quickly soared to third place on Netflix’s Top 10 list. Although years have passed since the last episode, the show remains relevant with a strong fandom.

Paramount Plus will also reboot the beloved Nickelodeon series later this year. While Paramount Plus is yet to disclose an official release date, the reboot will likely drop mid-year or later. The revival will see the return of Cosgrove and Kress as their respective characters, as well as Jerry Trainor as Spencer, Carly’s older brother.

McCurdy, however, has not announced her return as Carly’s comedic best friend. Although the reboot most likely won’t feel the same without the prominent and loved character that McCurdy played, the news of other cast members returning is relieving nonetheless.

Jay Kogen and Ali Schouten, producers of “The Simpsons” and “Future President,” respectively, will take over the reboot. Although neither are particularly renowned, “iCarly” is better off when not in the hands of former producer Dan Schneider, who allegedly had temper issues and was alleged to have groomed many of the original cast members for abuse.

While the reboot has many fans excited and revisiting the original “iCarly” episodes, it’s disappointing to see that only two seasons, or around 39 episodes, are available. It is not really a childhood marathon for fans to enjoy. Additionally, viewers must subscribe to Paramount Plus in order to watch the series.

Seeing another fan favorite title on Netflix may be exciting, but many forget what the cost of bringing in more shows means — other shows becoming unavailable.

Netflix has long been known for its comfort shows, such as “The Office,” “Gray’s Anatomy” and “Friends.” And as shows like “The Office” and “Friends” move to other streaming services, adding two seasons of “iCarly” doesn’t seem to suffice.

Still, despite the controversy over whether it’s right for Netflix to keep removing popular shows to cater toward family-friendly viewers, “iCarly” is a better addition for both adults and children. It’s also a show that can be universally enjoyed, unlike Netflix’s streak of teen-aimed romance films such as “To All the Boys I’ve Loved Before”or “The Kissing Booth.”

It’s also a great marketing decision on Netflix's part. Not only was “iCarly” a huge success for Nickelodeon — scoring five Emmy nominations and even a movie, “iGo to Japan” — but also got it’s own spinoff series, “Sam & Cat.”

“Sam & Cat” features Sam, played by McCurdy, and Cat, played by global pop star Ariana Grande. Both “Victorious” and “Sam & Cat” are currently streaming on Netflix, so once “iCarly” lovers finish the first two seasons, they can watch the other two shows as well.

While fans will have to wait a bit more until the release of the new “iCarly” series, the original first two seasons are available. It would be interesting to see how the revival builds on the previous storyline, especially since webcasts are no longer much of a thing.

Hopefully, Kogen and Schouten can pull it off by satisfying old viewers and bringing a modern twist for new audiences.