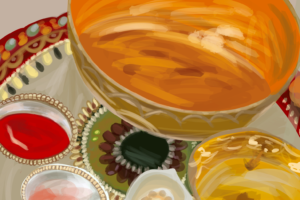 Photo by Minsui Tang
A plate of Haldi, similar to the one used by the Sharma sisters before Edwinas wedding

Permalink
Bridgerton, the oscar-winning show, came out with its new season, exceeding many viewers’ expectations.

“Bridgerton,” a thrilling romantic Netflix series introduced to the world in the midst of quarantine, has since grown into a stunning international sensation. Set during the Regency time period, the show follows the influential Bridgerton family as they navigate the hurdles of London high society. Following the recent release of the second season — which follows the family’s eldest son, Antony Bridgerton, and his eventual wife, Kate Sharma — Bridgerton has set the bar higher for period dramas.

The secret behind the show’s stunning success lies in its accurate portrayal of South Asians.

Mainstream productions like “Never Have I Ever,” portray degrading stereotypes of South Asians, often depicting them as undesirable, unattractive and nerdy.

According to the New York Times, colorism originates from the colonial rule of India and Bollywood’s casting of primarily light-skinned actors as protagonists. In fact, some companies in India manufacture addictive creams for darker-toned women to whiten their skin. These creams often contain steroids and should require a prescription, but are instead freely distributed to women who are pressured to meet society’s Eurocentric beauty standard.

In 2018, the selling of 14 common steroid creams without a prescription was banned, but these creams are still widely used  because the desire for light skin continues.

However, Simone Ashley, who is Tamil and has dark skin, is cast as the main actress in Season 2 of “Bridgerton,” giving South Asians the representation that has been consistently lacking in the film industry.

An important factor that sets the second season apart from other shows is the seamless integration of South Indian culture, without it being pushed forward as a diversity quotient.

One particular scene that stood out was when Kate Sharma was oiling her sister Edwina’s hair, a common practice in India used to help soften and increase hair length.

Right before Edwina’s wedding, the other two Sharma’s were applying haldi to each other. The show itself states that haldi is believed to help find someone a worthy partner in some Indian cultures. Additionally, in many Indian households, the younger sibling often refers to their older sister as “Didi” and the season applied this when Edwina (the younger sister) always referred to Kate as Didi.

These subtle connections to Indian culture give viewers a sense of belonging and recognition.

With “Bridgerton,” viewers can finally see an accurate portrayal of South Asians, something many Bollywood movies are still lacking. Hopefully, in the near future, film productions will view “Bridgerton” as a role model for implementing accurate depictions of South Asians and minorities as a whole instead of basing them solely on stereotypes.