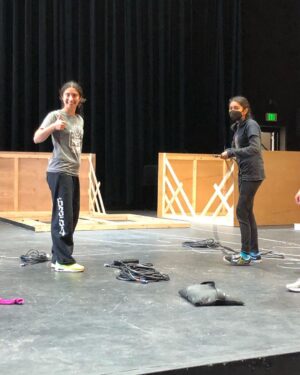 Sophomore Arushi Maheshwar (right) at the load-in on Sunday, March 27.

Since 2018, the drama department has had three seniors and one junior fill the role of the stage manager — the director’s right hand person and one of the most important positions for the production. This year the role is being held by an unusual combination: freshman Diya Kapoor and sophomore Arushi Maheshwar.

Maheshwar and Kapoor split up their duties by attending rehearsals for the spring musical, “Fiddler on the Roof,” on different days. Their responsibilities include taking notes on blocking, writing up reports of each rehearsal, taking attendance and handling other logistics. During the actual performance, their main duty is to “call the show,” which means calling all cues for sound and lighting in the McAfee Center.

Maheshwar, who has been involved in drama since middle school, had seen stage managers running shows for years, but she had not been in direct leadership roles herself as she pursued her desire to be on stage instead.

Her passion led to her rapidly developing an affinity for acting, starring as the wife in the short film “Prohibition” during her freshman year for a Media Arts Program film festival.

Alongside acting, her career in stage-directing began in her freshman year. Although she had never planned on becoming a stage manager, she stepped into the role when the former drama teacher, Bryan Ringsted, was in need of a stage manager; she soon realized her passion for the role.

“I realized there was something about stage management that appealed to me,” she said. “People would come to you for help, and they would ask you questions when they were confused.”

Despite her being younger than her predecessors, Maheshwar has gained a lot of respect from her peers in drama.

Senior Taylor Zhou, who stars as Tevye in “Fiddler on the Roof,” first saw Maheshwar acting for the 2020 Connections film festival organized by the school’s Drama Club.

Maheshwar said that, as an underclassman, she sometimes has difficulty in balancing being assertive and not being mean or intrusive, but feels that she has been improving as the show progresses.

Maheshwar also serves as a mentor to Kapoor, who is taking on the position of co-stage manager for the first time this year.

Kapoor enjoyed the musical chosen for the spring production, and after looking up to the tech duties and managers from previous productions for so long, she decided to become one herself.

“[Maheshwar] is such an amazing role model and I’ve learned so much from her about how to do things, how to handle people and how to take on that leadership role,” Kapoor said. “I feel like I’m going to use the skills she’s taught me for more than stage managing.”

Kapoor believes that being an underclassman in a leadership position can be challenging because her voice is not always heard during rehearsals. However, she says that getting to know the cast better has mitigated these issues for her.

“Over time, as we’re getting closer to Tech Week [the last week of rehearsals], I feel like I’ve grown to love the cast and love the musical and love what I’m doing,” Kapoor said. “I look forward to rehearsals all the time.”

The show’s progress will culminate on April 29  and 30 and May 6 and 7 when the play runs in the McAfee Center. Tickets can be purchased at https://lgsuhsd.vbotickets.com/events for $20 to $50 depending on seating position.