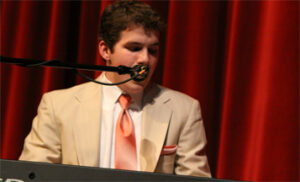 The crowd exploded into applause on March 9 in the McAfee Center as junior Brandon Pierce was crowned the winner of Saratoga Idol in front of an audience of over 150 students, friends, and family.

Pierce stole the show as he sang “Apologize,” originally sung by Timbaland, while playing the piano. Pierce’s sweet melodic tone won the crowd’s heart. Pierce is part of a screamo band “Revive the Lifeless,” a type of music which is typically defined by screaming vocals, with a few of his friends. He also posts videos of himself singing on YouTube to get constructive feedback.

“Winning Saratoga Idol was amazing,” said Pierce. “Everyone sang really well and I congratulate all of them on their performances. I auditioned [for this] to have some fun but I never thought that I’d win the whole thing. I was speechless.”

“I’ve never found musicals to be very nerve-wracking, but Saratoga Idol was super stressful,” said Henderson. “If the music stops, it’s dead silent with only me onstage.”

To ease the audience into the show, juniors Jay Lee and David Mandell entertained the crowd as emcees by telling pun-filled jokes to provide transitions between performers.

“I felt honored to be asked to come back to perform and to hand off the crown to the winner,” said Lustenader. “It felt natural being on the McAfee stage because I performed on it for my entire high school career. I’m definitely going to miss it.”

The 12 singers, seniors Connor Clarke, Eric Sun and Erin McCroskey; juniors Taara Rangan, Esha Roy and Alana Rossip; sophomores Katie Cummins and Anika Jhalani; and freshman Sanjana Shukla, in addition to Pierce, Bae, and Henderson, performed their songs, each receiving positive comments from the judges hoping to make it to the finals. Roy sang “I Turn To You” by Christina Aguilera, astounding the crowd with her sweet voice. Shukla sang Etta James’ “At Last,” a soul song that requires a big voice and passion. During intermission, the audience voted by placing their ticket in their favorite singer’s box and returned to their seat to watch the intermission acts.

“Being a part of an intermission act was really fun,” said Jan, “and since Eric and I were in it last year, it was great to bring more people into the act with us.”