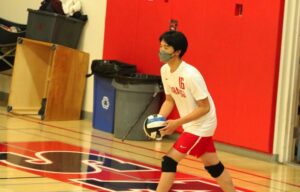 Photo by Ariel Zhou
Boys’ volleyball player gets ready to serve during a game.

Permalink
Injuries and absences contribute to a winless record.

After a season of many close matches with schools such as Homestead, Harker, and Los Gatos, the boys’ volleyball team ended their injury-ridden season with a record of 0-14. The team started off with a lot of hope for their season, but many unpredictable injuries and problems that arose resulted in many issues.

The team adjusted to a new coach, Lori Gragnola, who had coached at Saratoga High School 11 years before. Due to a majority of the players on the team either being injured or on academic probation, a new lineup had to be made. This new lineup included numerous players having to play positions that they didn’t normally play.

Sophomore setter Kali Duvvuri was one of the players who was unable to play.  As court captain and lead scorer on the team, his absence caused the team to go into their first few games unconfident and scared.

“It was hard for me to take the time off since I couldn’t even practice with my team,” Duvvuri stated.

In addition to the absence of Duvvuri, the team also suffered from many injuries, with almost half the team’s players being unable to play. Among the injuries was senior captain Andy Tran, who missed multiple games due to a sprained wrist.

“It was just an awkward time since there were people playing positions that they didn’t normally play,” Tran said.

Though it was undoubtedly a rough season for the boys’ volleyball team, the absence of key players opened up the door for many unexpected stars.

Two of these players were junior Nathan Lim and sophomore Scotty Rich. Both Lim and Rich had little playing experience coming into the season and dramatically improved from last year.

“[Lim and Rich] definitely showed the most improvement amongst the team,” Tran said. “They really stepped in when everyone else was injured and were able to help the team out a lot.”

Freshman middle hitter Ryan Backhus was another valuable part of the team this season. Starting the season off on the bench, he slowly earned his spot on the court through his evident and quick improvement.

“[Backhus] has such a good drive, I could definitely see his passion for the sport through his hard work at practices and games,” Tran explained.

Though the team faced a tough season, their team bond and morale stayed strong as a result of their endurance.

“Even though we lost all our games, I’m just glad I had a fun senior year getting to play with all my friends,” Tran said.