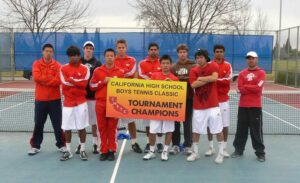 The SHS boys' tennis team—no. 1 ranked boys' in the state—return for a comeback this season after not attending NorCal in 2008.

As of now, the boys' tennis team—maybe the best team in the history of the school—is the No. 1 ranked team in the state, having won the Wawona Peachtree Classic in dominating fashion earlier this month.

As of now, the boys’ tennis team—maybe the best team in the history of the school—is the No. 1 ranked team in the state, having won the Wawona Peachtree Classic in dominating fashion earlier this month.

The undefeated boys’ tennis team is back on a mission following last season’s suspension from CCS due to the team failing to attend the NorCal competition in 2008. As a result, the players view this year as a rebound year, planning on winning not just the El Camino Division, the toughest public school league in the area, but also CCS. To help their cause, the Falcons have many returning players, such as No. 1 singles player John Lamble and juniors Nikhil Jayashankar and Deepak Sabada, playing No. 2 and No. 4 singles. In addition, senior Eric Gast returns to the team as No. 3 singles.

The team surpassed the bar set by their coach by placing first in the Peach Tree Classic Tournament out of 108 teams on March 5 and 6, ranking them first in the state.

“We knew we were going to be a great team this year talent-wise, so it was really all about executing,” said Sabada. “The teams we played were pretty good, but we ended up coming out on top.”

The Falcons won every match they played in the tournament, beating Dana Hills 7-0, Davis 7-0, Corona del Mar 6-1 and Monta Vista 7-0.

“Everyone on our team played really well because we only lost one match the whole tournament,” said Sabada. “Corona del Mar was probably the toughest team we played because we hadn’t played against them before.”

After sweeping the Peach Tree Classic, the team looks to compete in the Newport National Tournament on March 20 and 21, which will feature the best teams from around the country, ranked as the No. 3 seed.

University High School, the defending champions of the nation-wide tournament from Southern California, will be the main competition for the Falcons as well as Menlo, the team’s yearly rival.

“First, we’re going to focus on the [Newport National],” said Sabada. “This tournament is really important to us because we haven’t been invited in a long time and, with the talent we have this year, we know we can do really well in it.”