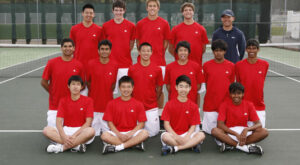 With the promise of a victory over arch-rival and undefeated Menlo hovering just a racquet’s length away, the boys’ tennis team fell just short amidst a perfect storm of injuries in the finals of CCS, held at the Los Gatos Courtside Club on May 14.

Disaster struck the Falcons as they were leading the Knights 3-2 in the best of seven contest. As the remaining two matches both went into third sets, players John Lamble and Andrew Hsieh both began cramping badly.

As their matches progressed, both players attempted to continue playing through their crippling injuries, despite the increasing futility of their effort—Lamble’s legs gave out during one point, but he managed to rise to his feet and continued playing to universal applause from both sides of the partisan crowd.

The Falcons ultimately lost both matches and fell to the Knights 4-3.

Although the outcome of the match was disappointing for the Falcons, whose only defeats this year have come to Menlo, head coach Tom Uyehara tried to put things in perspective for the players.

“I know that we didn’t get the result that we wanted,” Uyehara said. “But I’m still happy with the way we managed to conduct ourselves in this match and fight through our injuries and inter-team issues throughout this season.”

Previously the Falcons defeated Bellarmine Preparatory and Stevenson High School.
The team will play at NorCals on May 21 and 22.