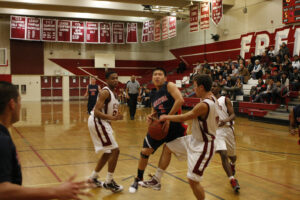 Boys’ basketball coach Trevor Naas and his team knew they had one major weakness going into the season—lack of height. But so far the Falcons have made up for their lack of height with skilled play.

Boys’ basketball coach Trevor Naas and his team knew they had one major weakness going into the season—lack of height. But so far the Falcons have made up for their lack of height with skilled play.

On Dec. 17, they tied for first in the yearly Prospect Tournament. Although the tournament was merely a preseason match-up between local high school teams, it provided a measuring stick for the Falcons to use as the regular season opened on Jan 4. They dominated Sobrato 62-47 and later beat Prospect in a 50-49 last-second victory.

Senior guard Tyler Jew said that the team played some of its best games of his high school career during the tournament.

“[The Prospect Tournament] was the first tournament we’ve ever won during my fours year here,” said Jew. “It was a great turn-around from our last tournament. ”

Jew hopes the late preseason victories will transition into the regular season, which started Jan. 4. Jew, however, was disappointed with the Falcons’ first regular season league game against Fremont, a last-second 41-39 loss.

“If we play like we did against [Mills and Los Gatos] throughout the season,” said Jew, “we have a very strong chance of winning league. But that didn’t happen in our game against Fremont and it’s something we need to work on.”

The main achievement for the Falcons, however, was establishing their game in the paint, both on the offensive and defensive side of the ball. Nas knew his players had the speed and talent, but he needed someone to step up to the role of the “big man.” That man was sophomore Steve Berman.

Berman, who has played on varsity since freshman year, brought his A game to the court this year with his 6’1”, 205-pound frame. Dominating on both ends of the court, Berman provided the Falcons with the aggressiveness and height they needed in the start of the season.

“I try to use my size to my advantage in the paint,” said Berman. “This year I’ve been working on my inside game and it’s been helping a lot.”

Berman joins senior guards Alex Chan and Chris Guengerich, sophomore guard Kyle Dozier, and senior forward Jasneil Nat to kick off the regular season. Their first home game of the season was on Jan. 7 against Milpitas, but it could not be covered in this edition of the Falcon due to publication deadlines.