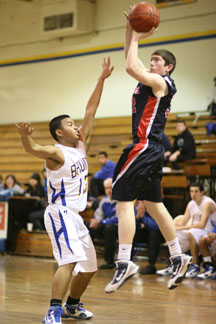 Freshman forward Kyle Dozier goes up for a jump shot against Santa Clara on Jan. 27.

After a slow 1-7 start, the boys’ basketball team finished the non-league season strong, posting a 3-1 record over the winter break.

This four-game surge came at a good time for the Falcons, who rolled into their first league game versus Cupertino with some positive momentum.

Saratoga’s winning ways continued against the Cupertino Pioneers, as senior shooting guard Daniel Chou exploded for a career-high 27 points on six three-pointers while shooting an astounding 71 percent from the field.

“We’ve definitely improved as the season progressed. During the preseason, we had a seven game losing streak, but now we’ve come back and started winning again,” said Chou.

Chou has been the primary source of offense for the Falcons and is leading the team with 13.1 points and 2.5 three pointers per game through 17 games. However, as he was quick to point out, scoring is not everything.

“Coach [ Trevor Naas] emphasizes defense,” he said. “He thinks that if our defense is good, then our offense will just fall into place.”

The team’s defense had been performing fairly well through the first three league games, holding opponents to just 41.3 points per game while the Falcons have averaged 46.3 points of their own. Surprisingly however, Saratoga had just a 1-2 record to show for its hard work after dropping consecutive games to Milpitas 49-41 on Jan 13 and Mountain View 43-41 on Jan 15.

“Both games we should have won, but at the end we just made silly mistakes,” said Johnson. “We can definitely improve on being strong with the ball and not make poor passes.”

These two flaws in the team’s overall game seem to be the only things stopping it from contending in the competitive El Camino Division. Limiting turnovers and stressing ball security were two of the three simple keys for success that second-year varsity coach Naas outlined at the beginning of the season.

Saratoga followed up their loss to Mountain View with a 66-40 drubbing at the hands of host Monta Vista High Jan 20. However, the Falcons recovered in a big way two days later by defeating visiting Lynbrook High 76-61 in the highest attended home game of the year. Chou had the hot hand again, tallying yet another outstanding 27 point performance. Johnson added 20 points and junior guard Chris Guengerich chipped in with 12 points.

Freshmen forwards Stevie Berman and Kyle Dozier have also been significant contributers on varsity, filling huge roles in Saratoga’s player rotation, according to Chou. Berman averages a team-high 7.1 rebounds per game, but also leads the Falcons in steals per game and field goal percentage. Dozier has chipped in on both ends of the floor in a significant fashion.

“We don’t really think of Stevie and Kyle as freshmen anymore. They’re just a part of the team,” said Johnson.

So far, Saratoga’s 6-11 record (2-3 league) is not as good as the team initially planned, but Chou notes that there is still good to take out of it.

“We’ve had a couple of bad possessions. Overall our season hasn’t gone too bad, even though our record doesn’t show it,” he said.

The Falcons had games against Santa Clara (Jan 27), Cupertino (Jan 29) and Milpitas (Feb 3), but due to printing deadlines the results could not be published in this article. Saratoga will head into hostile territory tonight, as they will face Mountain View at 7 p.m. They will close the season with three more games: Monta Vista at home on Feb. 10; Lynbrook away on Feb. 12; and Santa Clara at home on Feb. 17.