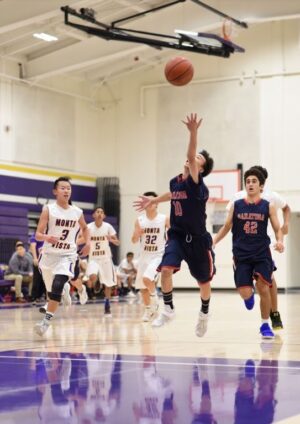 Even after I knew what had happened, I never thought that it could have been this bad.

It was Nov. 24, and our school’s varsity basketball team was playing against Homestead High School in our first preseason scrimmage of the year.

As a reserve player, I checked into the game about 10 minutes in, immediately turned the ball over and then proceeded to do the single dumbest thing I’ve ever done in my life: I ran full speed into the paint to rebound a teammate’s miss, swiped at and ended up missing the ball, and then, in an attempt to quickly hustle back on defense, stuck my arm out to push off the wall behind the hoop.

My left elbow disagreed with that one. This might come as a shock to you, but it turns out that you actually shouldn’t straight-arm a wall going at Mach 10 speed.

As I fell, I caught a blurry glimpse of the injury. It was all I needed. When I finally hit the floor, two thoughts immediately raced to my mind: “Well, there goes my season,” and “Wow, those ceiling lights are really bright.”

The pain was distant. The only feeling running through my head was the same one I told my coach, Patrick Judge, about when he came rushing over, asking me, “What do you feel, buddy?”

It’s funny, thinking back about it now. I’ve cried on multiple occasions after being yelled at during practices and games, by both coaches and by upperclassmen teammates. And I’ve definitely sworn at myself, teammates and coaches (under my breath, of course) for far less.

But at that moment, I didn’t cry, and I didn’t swear. I was too tired for that. In spite of it all, I sighed a breath of relief.

For now, my season was over.

You have to understand this: Our varsity basketball program is more than just a season-long commitment. It’s a year-long one.

In any offseason, there’s weight lifting and open gym three times a week. In the summer, there’s a plethora of tournaments, scrimmages and practices. In the preseason, it’s more focused and lengthy practices. And of course, in season, it’s daily practices with games sprinkled in here and there along with film sessions.

For the few weeks leading up to my injury, I was living in a vicious cycle that went something like this: a three-hour basketball practice that meant less time for homework and sleep, which made it harder to stay awake and focus the next day, which made my productivity levels after school lower, which meant I had to cram more homework after another grueling three hour practice.

Worst of all, I wasn’t the star player or anything for the team. I was a role player: the sixth, seventh, eighth or ninth man coming off the bench. This was the year where I was supposed to step up, prove my worth to the team and potentially break into the starting five.

I was on pace to do that, too. I was getting put on the offensive team during practices more often. I could tell my coaches were appreciating the defensive awareness I brought to the team and the selflessness of my play. Things were looking up.

But in the snap of a finger — or a joint, if you will — all of that was gone. The bad times, the good times and the times to come — all gone.

The doctors told me that my injury was an elbow dislocation and fracture. Truthfully, I don’t really remember what they said it was. What I do remember, however, was repeatedly asking them how long the projected recovery time was and how soon I could get back to playing varsity level basketball again.

About three months for full range of motion, they said. And getting back to full strength could take four or five months more.

Given everything I’ve said so far, you might be wondering why I’d want to even go back to playing hoops again.

Here’s the thing: Despite the process always being so brutally exhausting and time consuming, it was always rewarding. I had gotten into the rhythm of the grind. I grew closer to my teammates, both on and off the court. And though it was never easy, and though I hated it a lot of the time, at the end of the day, it was still — perhaps impossibly — fun.

Basketball brought out a part of me that I didn’t even know existed. People who know me know that I'm a pretty quiet, mellow and down-to-earth guy. I know how to keep my cool over most things, and I’ve also never been much of a hype man, either.

But basketball unleashed those primal, competitive feelings that I’ve never really felt before. It unlocked a part of me that cared so deeply and wholly about one thing. I punched and kicked walls after blowing layups and missing defensive assignments. I’ve left heated practices legitimately ready to fight someone. Once, I nearly concussed myself by intentionally slamming my head on the ground out of frustration after cramping mid-jump and falling to the floor.

I could see that energy in my teammates too. Maybe their displays weren’t as extreme as mine, but it was there all the same. I saw my quiet, laid-back teammates erupt in sheer celebration or blinding hot anger in response to clutch plays or unforced turnovers. These are the things that competitive sports can bring out in people.

Most of all, there’s just no replacement for it.

People have asked me if I missed playing during the rest of the season. When I was at home studying, I didn’t; I was glad that I didn't have to spend time going to practices and games, since I saw it as just another activity taking up valuable time in my life that could be used doing more academic things to better my future, apparently.

But when I went to support the team during games and saw my teammates battling out there on the court, the nostalgia hit me like a truck. I remembered the summers at the Santa Barbara tournament and the hype open gyms, as well as the traumatizing ankle sprains and 10 p.m. practices.

And I missed it. All of it.

I don’t know if I will be able to play next season, but I know that I really want to be back in my Falcon uniform, proudly repping No. 10.