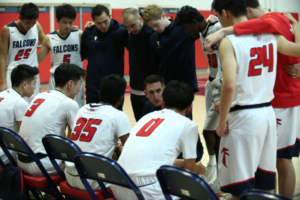 Boys’ basketball coach Patrick Judge always dreamed of playing college basketball. But when he arrived at college and mustered the courage to approach the head basketball coach, the response was not what he had hoped for.

“I love your energy and your enthusiasm for the game, but you’re just too small to play for us,” the coach said, to Judge’s dismay. “You should really think about coaching.”

Judge was disappointed, but rather than mope about this setback, he took the advice to heart.

“I thought that sounded fun, since I love basketball, I love kids and this gives me an outlet to keep my competitive fire burning,” Judge said.

His mom and uncles had kindled his love for basketball from a young age. As he grew older, the fast paced nature of the game fueled his passion.

“They hired me, we went 12-0, I absolutely loved it and I’ve been coaching ever since,” he said.

In addition to being a coach, Judge is a real estate manager for Intero. He said scheduling conflicts are not an issue since basketball practices take place in the evening.

“While managing a real estate office is time consuming, it’s also something that I can balance with my coaching duties,” he said. “I basically am a full-time coach, and I absolutely love it.”

Judge has come a long way since his first stint as a sixth grade basketball coach, winning the CCS Coach of the Year award in 2010 while employed at Leigh High School. Most recently, the league presented him with the SCVAL award for 2019-2020 Boys’ Basketball Coach of the Year.

He joined the Saratoga High basketball program in 2016. Under his leadership, the boys’ basketball team has been competitive every year, even when players are undersized compared to other teams.

“Coach PJ deserves all the credit I can give him,” senior Cameron King said. “He understands us as players and always wants a personal relationship with everyone on the team.”

Because of the pandemic, however, the basketball team’s time together has reduced significantly — and safety is Judge’s priority.

The team has not seen any COVID-19 cases so far. During conditioning in June, they were permitted to play on the same court but had to remain 6 feet apart with masks on and with separate balls. When they cannot hold practices, team members report their daily fitness and improvement to their group chat.

Before the pandemic, King and his teammates would meet and spend time together outside of practice. Even during the pandemic, they find ways to safely socialize.

“My teammates and I all have super close bonds with each other,” King said. “Sometimes I'll meet up with a few of them to shoot around and other times I’ll send a teammate a quick text or play a video game with them.”

In his efforts to keep the team close-knit, Judge has the boys do individual and team challenges. He encourages them to stay active in the group chat and discuss topics like NBA games.

Despite the challenges of the pandemic, Judge is grateful for the team’s sense of community and is excited for the day when he can get back to coaching in-person.

“There are hundreds of moments throughout the years in which I’ve said to myself ‘this is why I coach,’” he said. “One would think that these moments come after big wins, but most of my most memorable moments have come off the court, spending time with my team and having an impact.”