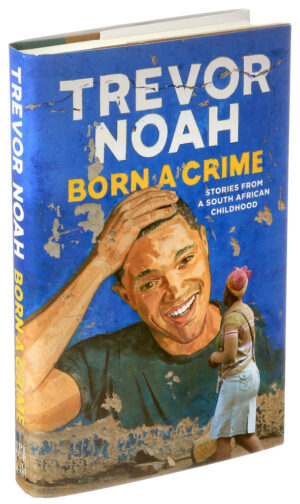 Through humor and captivating storytelling, Noah paints a picture of his younger self in a post-apartheid South Africa.

When I picked up Trevor Noah’s “Born a Crime,” I planned on simply skimming through a couple of chapters and going to bed. But after I began to read, there was no stopping me. It was only in the early morning that I finally extracted myself from Noah’s memories, having turned the last page.

Noah’s hilarious yet inspiring autobiography transported me to his childhood in South Africa during the end of apartheid. He reflects on his adolescent self using astounding wit, despite the countless struggles he faced.

The title alludes to the apartheid law that forbid sexual relations between Europeans and non-Europeans. Due to his illegal parentage — his black mother and white father — Noah was quite literally “born a crime.”

Whether it’s getting thrown out of a moving car or burning a cursed turd, Noah brings his sense of humor to everything he shares, making his memoir one of the most enjoyable ones I’ve read.

Growing up during the collapse of apartheid meant that danger was always around the corner. The Zulu and Xhosa, the two dominant ethnic groups in South Africa, clashed constantly in violent and bloody disputes.

When Noah, his Xhosa mother and his baby brother hitched a ride with an aggressive Zulu man, they soon realized their lives were in serious jeopardy. Trapped in a moving vehicle with two sleeping children, his mother’s only option was to jump. Due to her quick thinking, they narrowly escaped, bloodied and scratched up, but with their lives.

Noah’s mother, Patricia Nombuyiselo Noah, is truly fascinating. Her bold, stubborn personality is what makes her so endearing. Everything she does, from moving to a neighborhood where black people were forbidden, to having a mixed-race child, comes out of pure defiance from the ludicrous laws of apartheid.

Noah also writes about his struggle to fit in as a mixed-race child. During and after apartheid, people were divided into groups based on their race. He was first exposed to the reality of segregation in grade school, where “groups moved in color patterns.”

Though he chose to associate with his Black classmates most of the time, his skin color influenced the way he was treated, even when it came to his own family. While his grandmother had no problems disciplining his fully Black cousins, she never laid a hand on Noah because, in her mind, he was white.

Noah was bullied by Black kids as well. He was either too Black because he spoke both Zulu and Xhosa, or he was trying too hard to be white because of his perfect English.

Noah did not fit in with any groups at school. He was too Black to associate with other mixed students and too poor to hang out with the white kids. Still, he found a way around being the outsider by opening up and floating from group to group. This method saved him from being an outcast, but he still felt alone.

Noah makes his traumatic experiences candid and comedic while maintaining the gravity of each situation. It’s heartening to know that a man who has endured so much can still look at the world through a positive lens.

“Born a Crime,” published in 2016, is not the kind of book one can read and simply forget about. The stories of growing up amidst poverty, racism and violence cannot be forgotten. But most of all, the book embodies the idea life can change drastically for the better, even for a boy whose very existence was a crime.