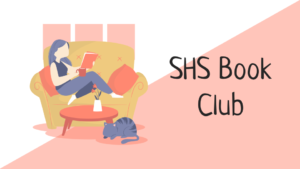 Sophomore Anastasia Ramirez had just finished the last page of her favorite book “Looking for Alaska” by John Green in December when she texted her friends to recommend the novel. She enjoyed how Green’s writing was satirical, yet intimate in the way it captured the characters’ actions and feelings. Realizing that they all enjoyed reading and recommending books, Ramirez suggested the idea of bringing back a book club in hopes of getting her peers off their devices and back into reading.

“We all love to spend hours reading books from John Green to the classics so we decided to spread the love of imagination and reading to our peers,” said Ramirez, now the secretary for the book club. “People can be so caught up in their phones and online that they forget there are a million different worlds and imaginations waiting to be explored just by picking up a small item filled with mysteries, love stories and adventure.”

Book club disbanded after the 2018-19 school year, but has recently been renewed by Ramirez, Avani Kongetira (president), Arielle Landau (vice president) and Afsoon Modiri (treasurer), all of whom are sophomores. The club aims to spread the love of literature, not only to the community, but around the world, especially to low-income areas.

Typical meetings start with an icebreaker to encourage club member participation, then transition into a book discussion, an introduction of a project or a guest speaker. Ramirez said they try to vary meeting events to keep members engaged.

Sophomore Uma Phalke joined because she was looking for new book recommendations. She enjoys that the club allows her to read in a less stressful environment compared to a classroom setting.

Phalke said her most memorable experience with the club was getting first place in a Kahoot! game about one of the books they’d read.

This year, the club has read “Strange Case of Dr. Jekyll and Mr. Hyde” by Robert Louis Stevenson and “Born a Crime” by Trevor Noah. The next book they will read is “Fahrenheit 451” by Ray Bradbury.

In addition to reading and discussing books, the club hosted guest speaker Kate Simonian, an award winning poet and novelist, who spoke on her writing career and past works in the meeting on April 16.

Ramirez said her favorite part of the club are the projects to bring literature to different areas. For example, the club is holding a book drive for students at Belle Haven Elementary School in Menlo Park and a pen-pal project partnership with Strive2ThriveEdu to write letters to students in Bangladesh.

“I am so excited for this project because I know how much these students will appreciate a handwritten letter from a high school student,” Ramirez said. “Letters are so intimate and personal and will really brighten their days.”

Ramirez said they plan to do more fundraisers and book drives for low-income schools and expand the pen-pal programs to other countries. Along with growing the club, the officers’ primary focus is to reach out to underprivileged students who have limited access to literature.

“We ultimately want our club members to read our books but also go beyond that — to give back,” Ramirez said. “Although we are just starting, we are already making an impact.”