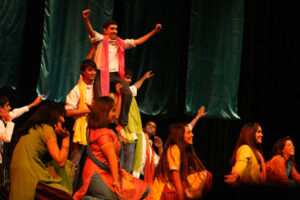 Freshmen put on their dance at the 2009 version of Bombay in the Bay.

Unlike previous years, Bombay in the Bay, the Indian Cultural Awareness Club’s (ICAC) annual show will be pushed back to May 1.

The date was changed because the McAfee Center was accidentally double booked in March for the intended date of Bombay in the Bay. The ICAC officers also felt that the show could be better if they had more time to prepare for the show.

At least 10 acts will be performing, including several dance numbers, a capella singer and various instrumental pieces.

Senior Hashim Hyder, who will be performing at the event for the first time, is looking forward to participating in the show.

“After seeing the spectacular show over the past few years, I felt that I needed to be a part of this annual charity show,” said Hyder.

The open quad dance and dinner, which is after the show, will be moved to Foothill Elementary School this year because the quad will be in use for drama club activities.

ICAC is expecting a wide turn out due to the soldout show over the past two years as more than 500 people are expected to come.

“I’m extremely nervous and excited for the show to happen because we have to match up to last year’s amazing show,” said senior co-president Divya Singh. “But, I’m going to try my hardest to make Bombay in the Bay worth remembering this year as well”.