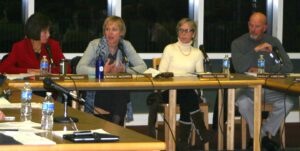 The board discusses whether to distribute additional funding to the schools on Jan. 11.

After receiving data from a new voter poll, the Los-Gatos Saratoga Unified High School District board is expected to vote on a proposed parcel tax measure that would help the district alleviate the budget crisis and preserve programs at its meeting on Feb 1.

After receiving data from a new voter poll, the Los-Gatos Saratoga Unified High School District board is expected to vote on a proposed parcel tax measure that would help the district alleviate the budget crisis and preserve programs at its meeting on Feb 1.

The new survey was conducted by EMC Research, a market and opinion research firm based in Oakland. The survey polled 600 district residents of the district by phone between Nov. 29 and Dec. 4. This is the second poll to be conducted about the parcel tax since the one conducted by the Center for Community Opinion last May.

The poll ascertained voter support for two proposed parcel taxes, one at $49 per parcel and the other at $89. The survey indicated that the $49 tax has enough support to meet the two-thirds threshold for passage, but the $89 tax falls short.

If the $49 tax passes, it is expected to generate approximately $800,000 annually in revenue for the district. Currently, the district is facing a deficit of nearly $1 million for the 2011-2012 school year, the district’s total general fund expenditures was $34.8 million for 2010-2011. If no parcel tax is passed, the district will be forced to make spending cuts to fill the shortfall. Proposed cuts include reducing classified staff, increasing freshman English and Algebra classes, and cutting languages with low registration such as German II and Japanese III.

The survey indicated that a concern over the economy as well as a lack of understanding over the true need for money contributed to the lack of support for a larger parcel tax.

“The problem with high-performing district’s [like LGSUHSD] is that you’re doing such a great job and you have excellent test scores … that people feel that you must not need money,” said Ruth Bernstein of EMC at board meeting on Dec. 7.

Perhaps more worrisome for the district was the erroneous belief among some residents that a parcel was already in place. Only 21 percent of parents and 16 percent of all voters correctly answered that there was no parcel tax currently in place.

The survey further indicated that despite voters’ reluctance to impose a new parcel tax, trust in the district remains high, and most voters believe the district is doing an excellent job in educating high school students. Eighty-nine percent of voters said they felt the quality of education was “excellent” or “good.” Ninety percent believed that both high schools adequately prepare students.

In addition, EMC’s poll showed that voters trust the district to manage its money responsibly. Forty-six percent said that the district’s management of money was either “excellent” or “good,” one of the highest approval ratings in the state. Because of the strong belief in the district’s responsibility, some voters are willing to pay additional taxes to support the district but others remain opposed to any new taxes.

Although the survey indicates that there is sufficient support for a $49 parcel tax, the board must still decide on an appropriate time to hold the election for the measure. Estimates indicate that holding a special election for the ballot measure in May would cost the district $442,000 which would be paid out of its reserve fund.

Despite the cost, EMC recommended holding such an election because it would give singular attention to the parcel tax measure. Putting the measure on the general ballot in November would be cheaper, but at the risk of having it shot down by voters overwhelmed with the numerous other measures and propositions on a typical ballot.

“[The advantage of] getting a little bit of distance from that November 2010 election is that … if we’re looking at electoral opportunities a special election looks like a good one because you avoid some of that negativity [in a general election],” Bernstein told the board.

The board took comments and feedback by the public at its meeting on Jan. 11. Members of the community, and groups such as the Saratoga High Foundation, New Millennium Foundation, and various boosters voiced their support of the parcel tax.

At the town hall meeting on Jan. 20., several members of the community advocated going for a higher parcel tax despite the projected lack of support. Superintendent Cary Matsuoka responded saying that although the proposed parcel tax is small, it would be better if the district had some revenue from a smaller tax as opposed to no revenue at all. A brainstorm conducted at the meeting suggested, among other ideas, to better educate senior citizens about the parcel tax, inform parents about the use of the parcel tax revenue, reach out to SHS alumni, and utilize students in the campaign process.

The board will be open to further public input about the parcel tax at a town hall meeting held at Los Gatos High’s library on Jan. 25 at 7 p.m.