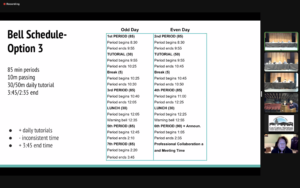 Permalink
Teachers and others express frustration with the delay.

During a board meeting at Saratoga High on May 10, members of the Saratoga High and Los Gatos High staff presented the results of a survey sent out to students on May 5, attempting to finalize the 2022-2023 school year bell schedule. However, the five-member board opted to delay guidance due to differing opinions on the bell schedule evaluation process.

Over a period of four days, the survey received over 1,500 responses from student, parent and staff stakeholders. The survey presented three options for a bell schedule: the current schedule, a new “Option 2” and a new “Option 3.”

A majority of stakeholder groups at SHS preferred “Option 3,” which features alternating 30-minute and 50-minute daily tutorials and ends at 3:45 p.m. on Red Days — the same as the special bell schedules used throughout second semester. The most popular option for LGHS stakeholders was “Option 2,” which is nearly identical except for 40-minute tutorials every day at the expense of ending school at 3:55 p.m. on odd days.

According to principal Greg Louie, the results largely reflect a key cultural difference between the two schools: 55 percent of SHS students have 7th period classes as compared to a 7th period enrollment of only 20 percent at LGHS.

As a result, the district proposed having each school run on a different schedule, which sparked some concerns that teachers would not be able to jointly teach at SHS and LGHS. This concern, however, was quelled after the district and District Teachers Association assured the board members that the option would still be available, even with different schedules.

Some board members expressed additional concerns about the process that led to the bell schedule survey. A majority of the board gave guidance to hold an additional study session meeting in order to receive parent feedback on the effectiveness of the rolling block, which they said they had received complaints about.

Superintendent Mike Grove and associate superintendent Carrie Bosco asserted that such questions had already been addressed in previous surveys and committees, but a couple other members of the board remained insistent on holding an additional study session to discuss the possibility of another alternate schedule with all periods meeting for a shorter duration on Monday. Because of this, no schedule was officially adopted at the meeting.

In public comment, community and administration members expressed their frustration with the speed of the process and asserted that further changes and meetings on the bell schedule would be counterproductive.

“I remember when there were schedules taped on the wall of the student center back [during my] freshman year,” junior Shaan Sridhar said to the board. “Now that we have narrowed it down to just three, those will be our best options and I don’t think more meetings would change that.”

In addition, teachers and staff criticized the board’s guidance to delay the bell schedule decision, which they argued was taking too long and confusing the community.

“As you can imagine, I’m feeling quite frustrated at the idea that just a few other ideas might send us off in a totally different direction,” English teacher Amy Keys told the board.

According to Louie, the final decision of the bell schedule process will be announced in the near future through either the superintendent’s office or his Friday newsletter email.

“It may take a couple years to get a long-lasting schedule for the next 10 years, but we’re getting closer and closer,” Louie said. “But, hopefully, we can finalize the current year’s bell schedule [soon].”