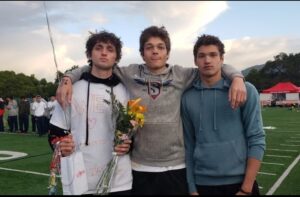 Freshman Giulio Morini Bianzino leaps into the air, rises above his opponents and snatches the long rebound. He pivots, spots a teammate ahead and launches the basketball across the court, leading to an easy layup. Impressive plays like this one are common for Giulio during the boys’ varsity open gym practices.

And yet, at 6’2, he is not the only one in his family blessed with height and athletic talent; in fact, his father and two other brothers are also athletes who excel in their respective sports.

The Morini Bianzinos epitomize the definition of an athletic family. Giulio, the youngest of the three brothers, has been playing organized basketball for only three years, but still made the varsity basketball team this year as a freshman and performed impressively in long jump and high jump for the track team.

The first sport Giulio tried was tennis, which he played for five years before joining his first National Junior Basketball (NJB) team in the sixth grade. Since then, he has stopped playing tennis to focus on basketball, a sport that suits his height and athleticism much better.

This year, Giulio joined the track and field team, competing in the long jump and high jump field events after initially being approached by the high jump coach Danny Wallace, who scouted him out during his basketball practices. On April 21, at the CCS Top 8 tournament held at Los Gatos High School, Giulio long jumped a 20 feet 11 inch, placing fourth in the state for freshmen.

Similarly, sophomore Tommaso Morini Bianzino also used to play tennis, but he dropped the sport after realizing that he “wasn’t that good at it.” He tried out basketball as well, but he was less successful than his other two brothers had been. Tommaso said that many of his friends were on the swim team at DACA (De Anza Cupertino Aquatics), and he decided that he would try out swimming in the fourth grade. That experience helped him find his sport.

Tommaso has been swimming for six years and made the varsity boys’ swim team as a freshman. Last summer, he set a Pacific record in the 4×100 freestyle relay in the 15-16-year-old category.

The eldest brother, senior Vittorio Morini Bianzino, just like his two younger brothers, started his sports career with a tennis racket in his hand. He played for six years until he started high school, where he dropped the sport and joined the basketball and track teams.

Vittorio ended up playing basketball his freshman and sophomore years and competed in varsity track as a sprinter. He was awarded a JV team MVP award his freshman year for track.

Needless to say, sports have dominated the family’s lives. In addition to tennis, the three brothers were naturally accustomed to playing basketball in their backyard together for fun due to their father’s successful basketball career.

Early on, one problem the mother, Caroline Morini-Bianzino, faced with juggling the three boys’ sports was busing the boys to all of their different practices.

“My mom hated us. She always had to run between all these different places to get everyone to practices and games,” Tommaso said. “She had to race me to practice at De Anza, rush home and get Giulio to basketball practice, and back again and take my older brother to track, and the cycle repeated itself when it was time to pick us up.”

Since Vittorio and Tommaso now have drivers’ licenses, driving the brothers to their games and practices  is less of a problem. However, the time commitment that each respective sport requires affects the brother’s academics and how they manage their schoolwork.

The level at which the brothers compete in their sports effectively often demands over three hours of their time daily. Factoring in commuting, tournaments and other team activities, the three often find themselves scrambling to finish their homework on time.

“Obviously since we’re in so many sports we have to contribute less time to academics,” Giulio said. “Luckily I am a freshman so I don't have that much homework yet, but in the future, I plan on taking easier classes to cope with that.”

However, Tommaso said that daily demands of playing sports have improved his work ethic and how he schedules his day.

“If anything, I like having swimming because it makes me more strict with my time management,” Tommaso said. “It makes me actually know that I need to do my work instead of fooling around and doing something else.”

Vittorio added that doing sports make him feel healthier overall and that they helped him focus more at school.

“Playing sports has always been a part of my life and doing them actually helped me de-stress,” Vittorio said.

Despite their hectic schedules, spending all of this time practicing, commuting to various practices, games and tournaments have ultimately brought the family closer together. One result of the three brothers’ athletic successes is the constant arguments over which sport is the most difficult.

“I can’t tell you how many times over the dinner table we’ve argued which sport takes more skill — basketball, swim or track,” Tommaso said. “It’s all in friendly competition, though.”

And although their father has set impressive standards for the trio by playing professional basketball, Tommaso said that his dad never made them feel like they had something to live up to.

“When it comes down to what he expects out of us, it’s just to have fun, not to be an NBA player or something,” Tommaso said.

Furthermore, Tommaso said that his parents, his father especially, are always supportive of whichever sports the brothers wanted to try.

“We play the sports we play because we genuinely like them and because we want to be good at them. I don't play basketball because I want to impress my dad or anything like that,” Tommaso said. “He doesn’t force any of us to do the things we do. Even if I quit swimming tomorrow my dad would still be very supportive of me.”

Over the years, sports have formed a special familial bond in the Morini-Bianzino brothers. Among many things, sports have become a conversation starter for them — a common ground that helps the family stay connected and supportive of one another.

“I think even though we might not see each other as much since we do sports, it makes us so much closer because we all have something to relate to,” Tommaso said. “It’s really integrated into our lives.”