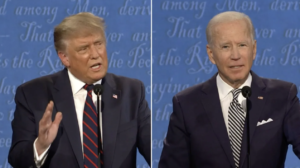 Compared with President Donald Trump, Biden was more level-headed and presidential, especially during the first debate.

Biden’s views on the Supreme Court were also far more logical. He argued that Trump should not have nominated a justice to the Supreme Court so late in an election because the American people would not be able to express their views. This was a fair observation, especially when it comes to concerns like the protection of the widely popular Affordable Care Act.

Trump tended to make ridiculous attacks in an attempt to undermine Biden. He continually prodded Biden to say the phrase “law and order,” as he believed that in saying those words, Biden would lose the support of the far-left.

The president went on to denounce Biden’s intelligence multiple times, using his ranking in college as evidence. His arguments were rude and childish; it was hard to believe that the president was saying these things.

Rather than actually giving cohesive answers, Trump resorted to cutting Biden off, a tactic that would have worked if his goal was to rattle Biden as much as possible. It seemed, however, that Biden managed to maintain his composure better than expected.

Even so, his frustration and dislike for the president glared through the television screen, and he couldn’t keep himself from adding a few of his own sharp insults.

One of the most concerning moments of the debates was Trump, when prompted to condemn white supremacists, telling the violent, far-right Proud Boys  to “stand back and stand by.” These words suggested that he was commanding them rather than condemning them — a thought that received heavy backlash from Democrats and Republicans alike, particularly as the Proud Boys adopted the president’s words as their new mantra.

That said, Biden was not faultless either. He failed to elucidate some of his plans, such as whether he would add justices to the Supreme Court if elected. Occasionally, he’d get his thoughts muddled and steer away from the question, something both vice presidential candidates did as well.

Vice President Mike Pence had more than his fair share of sidestepping questions, often going back to previous questions instead of discussing the one at hand. He simply did not answer several of the queries posed by the moderator, journalist Susan Page, including one about Trump’s plans if Biden is elected.

By taking a milder approach, he managed to repair some of the damage done by Trump during the first presidential debate. Pence may not have been as blatantly disrespectful as his running mate, but his habits of interrupting and question dodging were infuriating.

Senator Kamala Harris, on the other hand, was more composed, and her words were assertive and compelling.

She based her attacks on the Trump administration’s delay in informing the public of the coronavirus. It was slightly disappointing that she didn’t discuss how the president and other members of his inner circle contracted the virus, seeing as it was a critical situation that emphasized the gravity of the pandemic.

Although Harris neglected to answer some of the questions, she gave consistent answers and she made her point: The Trump administration is unworthy of another term.

Biden and Harris were the distinct winners of the debates, but, ultimately, it will be up to the American people to decide who should take office.