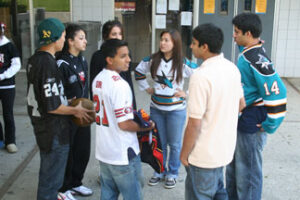 Students gather to practice for the Benefit Fashion Show.

Music pulsed through the dimmed cafeteria of Argonaut Elementary School as models junior Kushal Shah and senior Sahar Padash strutted across the catwalk in Oakland A’s and San Francisco Giants caps and jerseys. Their crisp poses and flirtatious skit gave the crowd a hint of the catwalks of Paris, but this was the Benefit Fashion Show, performed on April 25-26 to raise money for a chosen charity.

“I am really proud of all the models for their performance,” said junior theme head Leada Malek. “Even though I know that some themes had trouble meeting and staying on schedule, they still all did a great job.”

This year, the Benefit Fashion Show’s proceeds went to the National Disabilities Sports Alliance, an organization that funds athletes who are physically handicapped in international competitions. Joe Wise, a sophomore at Prospect High School, attended the fashion show on behalf of the National Disabilities Sports Alliance. Wise is a competitive swimmer with muscular dystrophy.

Benefit commissioners and seniors Zo Shain, Haley Sullivan and Meg Mastman began planning for the fashion show at the end of the previous school year, but after they had set the roster for the show, they faced problems with keeping the show’s progress on schedule.

“Early on, we had been telling theme heads to get their clothes and their models’ performance done on schedule,” said Shain. “It was hard getting things done with so many people—everything wasn’t done on time.”

The Benefit Commission also had trouble getting a date for the show, as their first two dates conflicted with Junior Prom and Sports Boosters.
“Despite the craziness, it all came together in the end, and we put on an amazing show for everybody,” said Malek.