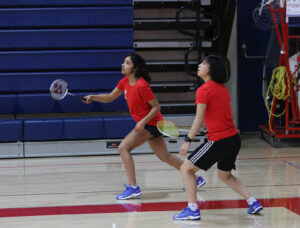 On March 28, the Falcons fell 16-14 in an away game at Milpitas, a relatively new school to the upper league.

The Falcons trailed the Trojans throughout most of the matches. The only games left to conclude were No. 1 and 2 boys’ singles, boys’ doubles and mixed doubles. Of the six games, five came down to three-set games, with No. 1 boys’ doubles winning in two games. While other No. 1 games were still playing, the Falcons ended up losing all three No. 2 games by a close margin, giving the Trojans the overall victory.

No. 1 boys’ singles  Adrian Mar, a freshman who is nationally ranked, and the No. 1 mixed doubles team of sophomore Ryan Hsiao and freshman Victoria Tso still persevered to win their matches. After Mar’s match concluded, the entire gym gathered to watch Hsiao and Tso square off against their opponents.

Senior captain Nathan Luk saw a positive side to the loss.

“While this close loss was very hard for our team, it proved that we could compete in the upper division,” he said. “Now that we’ve reached the midpoint of the season, we have a better sense of how to compete and win games.”

Two days earlier, on March 26, the Falcons faced Lynbrook at home. Due to Mar’s absence, captain junior Alvin Ren was forced to play No. 1 boys’ singles instead of No. 2. Additionally, two makeshift girls’ doubles pairs — No. 2 and No. 3 — were announced minutes before the lineup was submitted. It was also the first time No. 1 boys’ and girls’ doubles played together in competition. Despite many close, three-set games, the Falcons ultimately lost 18-12.

Due to printing deadlines, The Falcon is unable to cover the game against Cupertino on April 2.