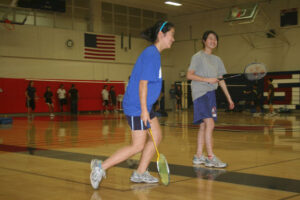 Badminton players are seeking to improve on last year’s ranking in the SCVAL league.

“This year, I expect Saratoga to finish top three in our league,” said coach John Phung.
Phung and Alex Chan, who both coached at Saratoga last season, will be sharing the coaching responsibilities for both the JV and varsity teams.

For the girls’ team in particular, a lack of experienced players seems to be the biggest concern.

“Having lost many crucial female athletes from the 2010 graduating class, this year is definitely a developing year for our female team,” said Phung. “However, we have a strong freshman class. Some of them will play on the varsity team immediately.”

“These athletes will provide support in conditioning training, game management, and serve as intermediaries between the coaches and players,” said Phung.

Gunn High School, consisting of well-trained and disciplined returning players, will be the biggest threat for Saratoga. The preseason began yesterday with a match against Cupertino High.