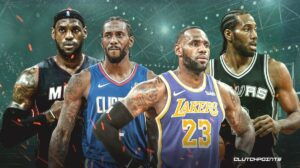 After the eventful 2019-2020 playoff season, many fans’ perceptions of certain NBA superstars have changed. Although some players, such as Los Angeles Lakers forward LeBron James, have maintained their position through amazing displays of dominance, others have fallen out of favor with the audience.

Taking into account what happened last year, I’ll be ranking the top five players I believe will do the best on their respective teams going into the 2021 season. All rankings have been determined from last year’s performances as well as the few games that have taken place in 2021.

The fifth best player in the NBA goes to Bucks forward Giannis Antetokounmpo, nicknamed the “Greek Freak.” Although some see him as just another player that has clear dominance but low playoff success, his athleticism and awards — including back-to-back MVP with one Defensive Player of the Year (DPOY) last season — is more than enough to earn him this spot.

Not only has Antetokounmpo worked on his 3point shot and free throws, which were previously the weakest part of his game, but the Bucks organization has also developed a strong roster around him, featuring players like point guard Jrue Holiday with the ability to space the floor and shoot. With more of a set system, the Bucks will be favored to head to the Eastern Conference Finals this year.

As a superstar who changed the course of the game forever, Golden State Warriors guard Stephen Curry takes fourth place. Curry recently put up a career high of 62 points against the Portland Trail Blazers, avenging the loss they had taken days before. Without his former teammate guard Klay Thompson, who was a critical shooter and defender for the team, Curry has become the sole focus of the opposing defense. Although some may think this would result in offensive struggles and difficulty scoring, Curry has shown what he is truly capable of through his off-ball movement and spectacular shooting.

The third best player in the league is Brooklyn forward Kevin Durant. Despite his worrying achilles injury, Kevin Durant seemingly will make a full return to his previous level of play. With astonishing performances such as his 34 points, nine rebounds and 13 assists game against the Denver Nuggets, it’s clear that Durant is still able to perform on par with his previous self. Just a few stand out performances give me confidence that Durant is regaining his former vitality and will continue to improve as the season moves forwards.

Despite what many fans believe, Kawhi Leonard’s struggles against the Nuggets in the second round of the 2019-2020 playoffs do not invalidate his second-place ranking. Just a year earlier, Leonard was being compared to Lebron James, and it would be foolish to cast him outside of the top 5 because of one down game.

Even in the playoff series where doubters claimed Leonard “choked,” he averaged 28.3 points; Leonard even singlehandedly pulled the Clippers out of their first round Dallas matchup by averaging an absurd 32.8 points in their 6 game series. Leonard is one of the most consistent players the league has ever seen, and he deserves his spot in the top 2.

Unsurprisingly, the top spot is going to the man who has dominated the league for the past 17 years. Despite his age, Lakers forward LeBron James still manages to amaze us year after year with his untouchable level of play. Even as a 36 year-old in a league whose players are 26 on average, James shows no signs of slowing down: Not only did James win a championship last year, but he silenced all doubters by averaging 29.8 points, 11.8 rebounds and 8.5 assists. Under James’s leadership, the Lakers are the favorites to repeat this season and take another championship.

With so many returning stars, the 2021 NBA is certain to be competitive and the Lawrence O’Brien trophy could be hoisted by any one of several contenders. Whether it be the dominating Lakers from Los Angeles, the deadly trio in Durant, James Harden and Kyrie Irving from Brooklyn or the Bucks coming back for revenge or a team no one is thinking of now, the NBA will be fun to watch for the next six months.