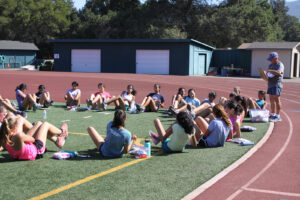 The crosscountry team stretches during a recent practice. Many sports teams are feeling pinched by athletics department budget problems.

Because of a continued decline in parental donations, the athletics department ran a deficit of nearly $60,000 in 2017-18 and had to be bailed again with donations by other school organizations, athletics director Tim Lugo said.

A record-low 70 percent donation rate failed to cover the $208,000 worth of expenses last year.

To make up for this deficit, the Saratoga Foundation and Sports Boosters donated $37,800 while ASB picked up the remaining $21,522, filling the gap in the same way they had for the 2016-17 school year. The athletics department now owes the ASB a cumulative total of $106,522.

This year is starting out even worse. With a 53 percent donation rate as of Sept. 7, fall sport donations are $11,000 short compared to the fall of last year, Lugo said.

To combat the lack of response, athletic director Tim Lugo and principal Paul Robinson have personally visited team meetings for every single sport since this past spring.

“A lot of it is just education on our part,” Lugo said. “Getting parents to be educated on what the money goes for, what it is used for and the different organizations we have.”

Team parents are now tasked with reminding other parents to donate. Credit card payments are no longer accepted, as the administrative team believes that a check-only policy will draw more donations.

Lugo said the continued deficits will have even more negative ramifications unless corrected.

“We have to start making some tough decisions,” Lugo said. “We’re at the point where we might not be able to pay for assistant coaches or buses for sports because I’ve got to make sure the necessities are covered right now, and it’s getting a little tight.”

Despite complaints from parents, all sports must now fundraise for all their events and tournaments. Unlike in previous years, the athletic department will not allocate a certain sum to each sport for purchases. This means that to pay for new uniforms and equipment, each sport must fundraise.

Another possibility is that some sports — especially those with smaller numbers — may be cut someday, but Lugo said he doesn’t want to think along those lines just yet.

By contrast, larger, more traditional sports face little danger of being cut because they raise enough money to support themselves, Lugo said. Football, for example, raises $50,000 annually and has never relied on the athletics department. Boys’ and girls’ basketball, baseball, field hockey are also self-funded, while boys’ soccer and boys’ and girls’ volleyball have mostly been self-funded.

Even sports like cross country can have deceptively high costs, Lugo said. With two buses, two-way transportation alone costs $2,000 per away meet. In comparison, it only costs $2,200 to hire a referee for the entire season for volleyball, he said.

Boys’ water polo is one of many sports already feeling the effects of a restricted budget.

“We can't afford to play tournaments, [so our team will have] less game experience,” captain junior Grant Chen said. “We're only playing one tourney this season whereas Homestead and Monta Vista are playing upwards of three or four.”

As a result, the team started a fundraising effort this year. After considering various methods of donation, they decided to use Vertical Raise, a platform that tracks individual contributions and incentivizes the top five donors with gift cards.

At the end of their fundraiser, players raised a total of $6,745, allowing them to purchase new balls, cages and suits, as well as pay for tournament fees.

As the debt to ASB continues to accumulate, Lugo hopes the district can step in and erase some of it, though negotiations for this funding have been delayed to allow the recently appointed superintendent time to become more familiar with the situation.

Looking forward, Lugo envisions that the scope of the current Sports Boosters will adjust to compensate for the athletic department’s debt. Though they have traditionally funded larger-scale projects such as installing new bleachers and renovating the weight room, Sports Boosters will now have to shift to a more sport-centric organization until teams can cover their own expenses.

“The money’s got to come from somewhere,” Lugo said. “How do we do these things without it?”