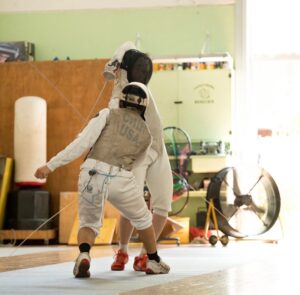 Students who hope to be recruited by colleges have to adjust their process as the pandemic affects tournaments and sports.

In early August, senior Jason Chin opened his laptop after hearing the “ding” that signified an incoming email. He clicked on the message, noticing that the sender was from the University of California San Diego (UCSD).

Chin’s eyes flicked to the subject line and absorbed the words: “Offer to join the UCSD Fencing Team in Fall 2021.” He screamed, and jumped out of his chair in celebration; Chin had just been recruited to fence for UC San Diego’s D1 team. The college search was finally over.

Moments like these are what most serious high school athletes dream of.

Throughout their high school careers, many student athletes put blood, sweat and tears into their respective sports, in hopes of being recruited to a college. Early on, they learn about the recruitment process and start down a road of endless work and effort. But when the pandemic swept the world last spring, many of their hopes of pursuing their sport into college plummeted.

During this time student athletes are heavily relying on relationships built prior to COVID-19, athletics director Tim Lugo said.

“It’s becoming increasingly difficult to build those relationships if they didn't have them already,” Lugo said.

Chin started his recruitment process in June of 2019 when he emailed the head coaches at various D1 and D3 colleges, specifying interest in joining their fencing team and arranging meetings with them at future tournaments to discuss his prospects.

The shutdown of competitions and practices that resulted from the pandemic scared Chin, as he worried that it would affect his own recruitment.

“I thought I might not get recruited,” Chin said. “During the lockdown, Stanford, which has produced Olympians like Alexander Massialas and Vivian Kong, dropped their varsity fencing programs entirely. If a top school can drop their fencing program, many others could have followed that path, which gave me a big scare.”

Fortunately for him, UCSD’s program remains intact, and he accepted the official offer in August. He will sign his NCAA letter of intent in  November.

“Turning all my attention to UCSD was such a relief,” Chin said. “It feels great to have so much security in terms of college applications. That stress is off my shoulders now.”

When the COVID-19 pandemic hit, Chin’s recruitment was not as impacted as he had originally thought. He was still able to send the UCSD coach videos of past tournaments and talk to him on Zoom about the commitment of recruitment and what his lifestyle would be like on their D1 team.

According to Lugo, one of the biggest problems that many student athletes have faced during the college recruitment process is their lack of a good highlight video. Since college coaches must watch hundreds of videos in order to select the perfect candidate, the first minute is crucial in determining whether an athlete would be a good fit at their respective schools.

While Chin’s recruitment process wasn’t significantly affected by the pandemic, senior Michelle Lim, who is trying to get recruited for soccer, has had a different story.

“Recruitment during COVID-19 is definitely harder for soccer, because there's not really any statistics that we can send them,” Lim said. “If you’re lucky enough to get them, you can highlight videos or full games, but it's not like in tennis, where you can send your match results or like swimming, with your times.”

Lim began her recruitment process during her freshman year. As she approached the end of junior year, she sent out her grades and schedules for college showcases, but the COVID-19 outbreak disrupted her plans.

“Junior year is the most important for recruiting, especially for highly academic schools,” Lim said. “All the schools that I was looking at were supposed to watch me play in two showcases — one in the spring in North Carolina and another in the summer in San Diego — but both were canceled.”

On top of the showcases being canceled, the league Lim’s team played in was also canceled, and the club Lim played at cut her team due to a lack of income.

“I was really nervous that I wasn’t going to have a team to play on for the fall,” Lim said. “I guessed the change [in the recruitment timeline and availability of spots] would be seen during the spring and summer, so I had some anxiety that I wouldn’t be seen by certain coaches in person at all.”

Her team recently began in person practices again after months of Zoom training. As her team slowly began to work their way back to where they were before the pandemic, Lim’s recruitment work and hopes began springing back as well.

Lugo stresses that the most important things for aspiring college athletes are having a strong highlights video and developing good relationships with coaches.

“There is no handbook on how to recruit during a pandemic, and we’re all adapting by the day,” Lugo said.