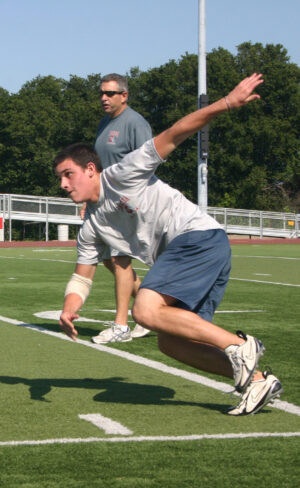 Junior Michael Guercio runs a drill working on his agility during spring training.

Most students are sleeping in the first weekend after school ends. However, junior safety and quarterback Michael Guercio will be in pads playing football with some of the best players in the area at Cal Camp, a three-day program at UC Berkeley.

Guercio is one of dozens of student athletes who participate in summer practices and camps. Teams such as football and field hockey dedicate their free days to conditioning and scrimmaging.

Football is the sport most known for its intense summer practices, and rightfully so. The team has already started spring training by doing light conditioning a few days each week. The boys kick off their summer traning the first weekend after school gets out by traveling to southern California and attending Cal Camp.

“It’s an opportunity to refresh our memories,” said Guercio. “A lot of team bonding happens there: You room with your team, eat with your team and you’re together for three solid days of football.”

For six weeks, the team weight lifts three days and conditions for two days. Then, after a week off, the boys will have double days for two weeks before school starts.
“Double days are the hardest because it’s really hot and you have to practice two times a day,” said Guercio. “You’re still adjusting your pads and learning a lot of the new plays.”

Another team with summer practices is field hockey, which has started training for the regular season. Like football, practices start a week after school gets out and double days start two weeks before school begins, when the team holds tryouts.

“I don’t think anything is quite as intense as football summer workouts, but we do work hard so that we can be ready for the regular season,” said junior forward Kelly Darchuk.

During the summer practices, coach Amber Wilson holds practices that consist of drills and scrimmages to help the girls focus on skills for the fall season.
Although Wilson runs the practices, returning varsity players lead the team runs and conditioning during the days off.

“Summer practices are to try and get an idea of what girls would be good for which team and to get a sort of team chemistry started,” said Darchuk.

Football and field hockey summer practices are optional until double days; however, the teams usually get good turnouts at these events.

“I love field hockey and I can’t imagine my summer without it,” said Darchuk, who attends school practices and other summer field hockey camps.
Guercio also enjoys practicing during the summer.

“You become so close as a team and you make really good friendships,” said Guercio. “It never quite seems like work; it’s always really fun and you’re always having a good time. It really flies by.”