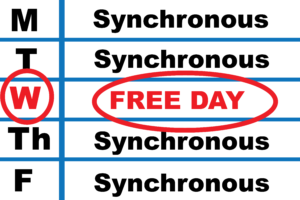 In fact, the benefits of Wednesday being purely for asynchronous work are so high that the district should keep it around as a part of their long-term scheduling plan, even beyond online schooling. A method where students come to school on Wednesday and have 5-6 hours of tutorial or office hours to complete everything assigned would be incredibly effective for stepping back and resetting, allowing them to prioritize their various commitments and preparing students for an unstructured college atmosphere.

In their current form, asynchronous Wednesdays would not be possible due to state laws requiring a certain threshold of instructional minutes. This on its own is a huge problem, and places far too much focus on spending time in school as opposed to actually accomplishing the task of learning. If US History with late-19th century factory workers has taught us anything, it’s that systems that focus on time spent by workers instead of their actual productivity are inferior.

Without broader national reform, however, the school cannot simply remove Wednesday and allow students free rein. However, if they were to keep it as a 6-hour tutorial period, which was proven in the 2019-2020 year to satisfy minute requirements, they could essentially make it a freely structured day but at school. This structure could even be an improvement on our current asynchronous Wednesdays, as it would allow students the free time along with the social interaction that comes with in-person school.

By keeping Wednesdays unstructured, students could make use of an opportunity to step back from school stress and mentally revive themselves in preparation for the next couple days of intense work. In fact, Wednesdays have been so essential that students may not fully comprehend their impact until they are taken away, specifically during three-day weekends. During a normal year, three-day weekends are a clear break in the school grind. During the pandemic, three-day weekends actually result in added stress. While students have an extra day off during the weekend, the mid-week opportunity to reset that Wednesday provides is removed, making the four days of school that much more taxing mentally and negatively impacting school performance.

Keeping asynchronous Wednesdays around even after the return to in-person school could also allow for greater flexibility within a school setting for their various activities. If a student needs to learn what an improper integral is from a math teacher like Ms. Warmuth, her classroom would be a short 2-minute walk away.

If a student happens to be participating in a Science Olympiad competition the next day, they have more time to prepare instead of having to struggle through a day school and come back just to study more. If the student simply needs to relax from a couple of busy days, they can take advantage of the time, especially with the help of resources like CASSY. The main benefit of an asynchronous Wednesday would be its inherent lack of structure, allowing students to use their time however they feel is necessary.

This short period of asynchronous work could even help a student transition into a college environment. As opposed to high school, college is far more asynchronous and puts students in charge of their own schedules. The current structure of going from all-day structured activity to little structure at all does not seem like the best segue, and introducing one day of the week that would mimic a college atmosphere could help students move to higher education more efficiently.

Whatever structure the school decides to take in the following years, including Wednesday as an unstructured day for students would come with immense benefits. The advantages, both mentally and performatively, are too good to pass up.