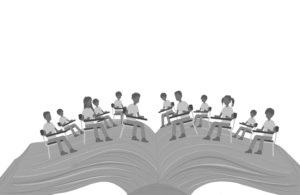 Before the start of the Black Lives Matter movement, junior Nadine Cobourn often saw casual racism directed at African Americans. From pushing harmful stereotypes to using the N-word outright, instances of racism were not unusual around Cobourn, who grew tired of attempting to correct her peers.

“I would try so many times and nothing would work so I just completely gave up,” she said. “It was exhausting to continuously tell people to stop when no one ever listened.”

Since the BLM movement gained attention in June 2020 due to a large number of protests against racism and police brutality after the murder of George Floyd, the importance of these topics has been brought to light, particularly for younger generations. Students are also gaining exposure to these kinds of issues in the classroom.

A major part of the curriculum for the English 11 Honors and MAP courses is the “Slavery and Its Legacies” unit, which dives into the works of various Black artists such as Toni Morrison, Octavia E. Butler and Steve McQueen. It introduces heavy topics surrounding Black history, such as the N-word, Jim Crow laws and implicit racism.

The goal behind the unit is to teach students about the complexities of slavery and how they go deeper than physical enslavement, said English 11 Honors teacher Amy Keys.

Through a variety of approaches, such as close-reading, Socratic Seminars and essay writing, Keys aims to emphasize the weight of slavery in the American experience.

“It’s not just about the labor economy,” she said. “It’s about sense of self and that it’s lasting. People can see how the reverberations of enslavement didn’t end the moment that we elected a black president.”

Discussing race in an academic setting is especially important for Black students like Cobourn, who often have to endure the burden of their classmates’ ignorance.

“It [classroom discussions] allows me to see that others are fully comprehending and understanding why the n-word is such a serious situation, and why it’s not a joke that can be constantly spread throughout the school,” Cobourn said.

Cobourn believes that discussing these difficult topics in the classroom allows students to comprehend the history and meaning of racism, especially as some families never address this subject at home. According to Cobourn, the classroom is a safe space for people to express opinions and ask questions without being judged.

Cobourn said she is uplifted by discussions that educate herself and her peers about racism; however, being one of the few Black students in the community has often made her feel singled out.

“There are times when people have mentioned African Americans, and it feels like all eyes are on me in the classroom,” Cobourn said. “It’s kind of awkward when people discuss it, but I’ve definitely felt a lot more comfortable in class these past few years.”

Like Cobourn, junior Taylor Wilson experienced similar discomfort in whole class discussions about race. After moving to Saratoga from New York in sixth grade, Wilson was used to a diverse learning environment. In Saratoga, however, he is the only Black student in most of his classes.

During a “Loaded Language” discussion, for which English 11 Honors students read and discussed several articles about the origin and use of the N-word, he was reluctant to speak up because it was one of the first heavy-hitting discussions he had participated in.

“It’s never easy to talk about race problems,” he said. “I’ve tried to come to [friends], but they don’t really understand, and it’s not their fault.”

Despite them being difficult conversations, Wilson said he believes that classroom discussions are the most effective way to educate students about race and racism, as opposed to advisory modules, which students tend to not take seriously.

He also noticed that maturity plays a big role in how students react to racial issues. Reflecting on the “To Kill a Mockingbird” unit in Redwood Middle School’s eighth-grade curriculum, Wilson recalled how difficult it was for him to take in, content-wise.

“My teacher would read it and just say the N-word like it was just another word, and while I didn’t do anything to stop them, I still knew it was bad,” he said. “I remember I would always hear giggles and feel people’s eyes on me. In eighth grade, people just don’t care. They’re still immature.”

One of his first experiences with blatant racism in Saratoga occurred in his sixth grade math class, when he borrowed a pencil and lead from his classmate and returned it after a few days.

“I thought it would be over but then after that, he lost the lead, and he blamed me for it. So he called me the N-word for a month straight,” Wilson said.

The classmate tried to justify his actions, wrongly assuming that Wilson could not afford his own pencil lead and had to resort to stealing because Wilson is Black. As a sixth grader, Wilson did not fully comprehend the weight of the slur, but since then he has grown to understand its severity.

“I saw it as just another word,” he said. “As I learned more about it, I realized that it wasn’t acceptable. Now, if I ever do hear it for whatever reason, I’ll shut it down.”

Recently, both Wilson and Cobourn said that the amount of racism they have faced has decreased significantly.

After BLM, Cobourn noticed a considerable reduction in the number of non-Black people using the N-word. While she still has no firm stance on when the word can be used, she feels that it creates a sense of community for Black people.

“I do love that the African American community has reclaimed the N-word and used it as a form of brotherhood and unity,” she said. “Especially in tough times when you’re facing racism and injustice, you need that support system with you and I feel like the N-word has been helpful to establish this unity.”