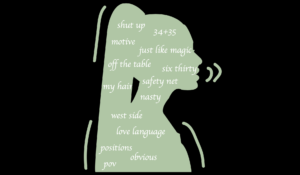 27-year-old Ariana Grande released a music video for her new song “positions” on Oct. 22, in which she completes a series of tasks ranging from signing executive orders as president of the U.S. to cooking food in a kitchen. The video has already garnered hundreds of millions of views on YouTube.

Although “Positions” is a great album, it was a bit of a letdown after her previous albums. The album felt very easygoing, but has no extraordinarily memorable tracks. That being said, “Positions” seems to be the most raw and mature album that Grande has ever released. Her use of strings throughout the whole album gives it a more intimate, personal feel.

Both “thank u, next,” and “Sweetener” were extremely poignant, detailing personal events from Grande’s life, such as the Manchester Arena suicide bombing  — which killed 23 and injured over 800 — the death of her ex-boyfriend Mac Miller and the end of her relationship with ex-fiancé Pete Davidson.

After coping with the death of Miller, who passed due to a drug overdose in September 2018, Grande seems to be signaling that she is ready to cautiously find love again.

Grande opens her “Positions” with “shut up,” a track that details her journey towards positivity and blocking out the critics. Other songs like “just like magic” and “six thirty” showcase Grande’s positivity and hopefulness for her future.

Some of my personal favorites were the features on “Positions.” Grande’s album featured three artists: Doja Cat in “motives,” The Weeknd in “off the table” and Ty Dolla $ign in “safety net.”

“motives” is seemingly the most mainstream pop song there is on “Positions,” but it employs a complimentary contrast between Grande’s soft voice and Doja Cat’s raspier sound.

“off the table” is The Weeknd and Grande’s second collaboration after the two released “Love Me Harder” in 2014. It exhibits a powerful and intimate chemistry between the two singers. Grande seems to reference Miller in this track, wondering if she will learn to love again, while The Weeknd presumably represents Grande’s current boyfriend, Dalton Gomez, singing that he will wait for her regardless.

The song is extremely introspective, and both Grande and The Weeknd reveal their vulnerable sides, which helps encapsulate the traumatic events Grande has faced in her past.

The next track on the album is “my hair,” a song that displays Grande’s vocal range with countless consecutive whistle notes. The guitar and instrumentation in the background flatters her vocals and makes for an impressive song.

Although this album didn’t live up to my expectations set by her previous two albums, “Positions” makes for a great laidback album to listen to while home alone in quarantine. Grande shows her audience her more mature side and shares her vulnerability, struggles and insecurities, making an intimate, heartfelt album.