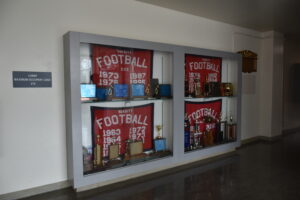 Varsity football banners and trophies for achievements dating back to the 60s placed in trophy cases are displayed in the gym hall.

The App Development club has decided to undertake a new project: the creation of a digital trophy case to supplement the current physical one in the Large Gym’s hallway.

Leadership director Matt Torrens approached App Dev in late February in hopes of creating an app or website to display the trophies and accolades from the school in a convenient way — making it easier for students and alumni to view the former students’ past achievements.

“We have 30 to 40 trophies scattered around campus. A third of them have never been put out and no one really notices that we have that many trophies,” Torrens said.

Besides the trophies kept in the gym hallways, others are stored in a cupboard in the office and cupboards in the snack shack in the gym. There are even various trophies scattered in obscure locations on campus, such as the storage rooms for volleyballs.

Torrens said having to maintain physical trophies poses both safety and financial concerns. Not only is transporting trophies difficult, with one staff member injured after a stack of trophy boxes fell, but re-engraving trophies is also costly.

Digitizing the trophy case would make it easier for alumni and students to see their trophies and the events that they won. The cabinets that currently house hordes of trophies, such as the basketball, football and robotics trophies, would also be freed to hold other athletic memorabilia.

Torrens also hopes to also completely revamp the gym hallways during the next school year, installing floor-to-ceiling cabinets and displaying only the most important trophies. He said that the school is debating whether to display academic trophies alongside the athletic trophies in the new cabinets. He also would like to consider placing a smart device such as an iPad near the new cabinets as a way for students to access the app.

While App Dev’s officers are leading the project, all the members will contribute to and code the app, giving them experience with designing and executing a fully functioning app, while also promoting collaboration and teamwork.

Krishnamurthi said that the club is brainstorming ideas for how to best display trophies in a intuitive and effective user interface. The officers plan to designate specific roles and responsibilities to club members in the near future and organize the project on GitHub, a platform for sharing code.

The project will likely be finished during summer, with students having to work throughout the rest of the school year to finish it.

Junior Kyle Petkovic said that he is excited to contribute to the app as a member of the club.

Petkovic joined the project because he “liked coding but never looked into it.” He had been hesitant to join the club before, since he had not been aware of the club’s activities, but news of the trophy project led him to get involved.

The club is using Flutter, a mobile cross-platform application development framework, created and designed by Google, to construct the framework of the app. According to Petkovic, few members are experienced with the program, so every member can learn and explore it together.

“Everybody will be learning something new, and hopefully that means I’ll be able to contribute something and keep up with and pay attention to the project,” he said.