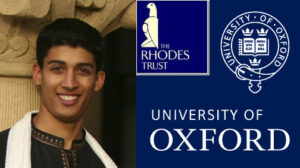 Varun Siviram will begin studies at Oxford next fall.

For the fifth time in eight years, a Saratoga High graduate has been awarded the Rhodes Scholarship. 2007 alumnus Varun Sivaram, a senior at Stanford, is one of 32 Americans who received the award this year. He will continue on to study energy policy and materials science at Oxford University in England.

Widely considered the world’s most prestigious scholarship, the Rhodes gives its recipients the opportunity to study any postgraduate discipline at Oxford for one to three years, funded by grants of $50,000 to $75,000 a year and a generous stipend for living expenses. According to the Rhodes Trust, 1,500 students apply nationwide for the scholarship; after that, 800 are selected by their universities to move on, 200 make it to final rounds, and 32 are selected.

“I really was just thankful to have made it that far,” said Sivaram.

Sivaram was watching the Big Game football contest between Cal and Stanford this past weekend while waiting for the committee to make its decision.

“I was in utter disbelief when I heard the news,” said Sivaram. “It’s an honor, and I know it reflects more on the Saratoga and Stanford communities that have helped me discover my passion for energy policy and instilled in me strong academic values.”

Sivaram was the valedictorian for the class of 2007, marking the second straight year a former SHS valedictorian has won the award. Last year Henry Barmeier, the top student from the class of 2006, also received the Rhodes while finishing his final year at Princeton University. Other SHS graduates to receive the Rhodes Scholarship are Ankur Luther (class of 1999), Betsy Masiello (class of 1999) and Chelsea Purvis (class of ’01).

If all goes well, Sivaram plans to go into energy policy after Oxford. He believes that policymakers need a strong technical as well as practical background, and hopes to represent a dual track approach for international climate negotiations and domestic electricity grid policies.

Sivaram, however, has not forgotten his roots in Saratoga.

“Sure I’m one of 32, but Saratoga, over the last 8 years, has picked up 5 Rhodes Scholarships. Since there are 2 available to NorCal students each year, that means we picked up 5/16, 31 percent of the available Rhodes,” said Sivaram. “That’s pretty cool.”

Last year Sivaram won another coveted award called the Truman Scholarship, along with 60 other students in the U.S. The Truman honors students who plan on playing an active role in public service, offering up to $30,000 for graduate study.