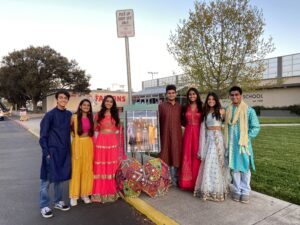 The six officers of the Indian Cultural Awareness Club pose for a picture on April 16 before the show started.

Although there were plenty of difficulties leading up to and during this year’s production, organizers called the show a huge success

On April 15 and 16, the Indian Cultural Awareness Club (ICAC) hosted its annual show, Bombay in the Bay, as a drive-in movie to adhere to social distancing and COVID-19 guidelines.

The event attracted an audience with 80 cars each night, each with about three to four people in them. To watch the show, each car was required to buy a $40 ticket, but there was no restriction on how many people could be in a vehicle.

Every year, the show donates its proceeds to a different charity. This year, the charity was Deepsikha, an organization that helps cancer patients in India. The show was able to raise $12,000 for this organization.

The ICAC officers prioritized the enforcement of strict safety guidelines for the show to ensure that the show would still be able to run. They allowed two people from each car to sit outside on lawn chairs with masks on while everyone else in the car would remain inside.

According to senior Neeti Badve, an ICAC officer, the chairs were a little difficult to control at the beginning since more than two people from each car wanted to sit outside. However, she said that “volunteers and administrators nipped that right in the bud before the movie started.”

Upon entering the school, loud Bollywood music played as the cars pulled into the first checkpoint where volunteers told audience members to put their tickets on their dashboard. The cars then arrived at the second checkpoint, where the passengers answered COVID-19 screening questions and drove over to the ticketing checkpoint. There, officers checked them in, handed them hand-signed brochures and glow sticks and told them which radio station to connect to in order to hear the audio for the show.

After getting through these stations, cars were guided by volunteers to spots in the junior parking lot where the screen was set up.

“There was a sense of normalcy in the community, and it felt really good to have everyone together in some way,” Badve said.

For many BnB participants, this was their first time they got to watch the show from start to finish, as they had only seen their specific parts; they also enjoyed seeing all their hard work come to life on screen.

In fact, Badve said many parents and viewers preferred this version of a drive-in movie over the regular performance in the McAfee Center.

“Because of all the locations and high-level editing, it made it feel like a Bollywood movie,” Badve said. “[The audience] loved how every student was highlighted in some way because cameras can give you different angles that the stage can’t.”

However, the preparation leading up to the show was not without its mishaps. Because of COVID-19 guidelines and the rule that students could not participate in multiple cohorts, the show had much less participation than in previous years. One dance had multiple mixed cohorts, prompting the officers to consider cutting their dance, but they ended up holding Zoom practices until the multiple cohort rule was lifted in March.

Then came the issue of the actual screen for the drive-in movie. Although the school had an inflatable screen, it was nowhere near the size of what the ICAC officers wanted, so they needed to find a place from which they could rent a screen in their price range.

Additionally, the officers went back and forth on deciding show dates before settling on April 15 and 16 due to conflicting sports schedules, filming schedules and the possibility that costumes from India may not arrive in time. The club also had to consider many different venues for the show, from the senior parking lot to the church parking lot, before finalizing the junior parking lot.

The night before the first show, the officers were up till 3 a.m. making final changes to the video with their editor, and were worried that the edits would not be finished in time for the show.

“Overall, the experience made us better leaders because it forced us to be adaptable and make quick decisions on the spot because every week, something new came up,” Badve said.

Similar to previous years, the mothers of the ICAC officers were heavily involved in the planning process and decorations for the show. Sveta Shandilya, mother of senior Pramukh “Proby” Shandilya, said that the officers and mothers “had to work very closely with the administration to follow school and country guidelines and to make necessary changes.”

There were six officer moms, who all helped in ticketing, traffic and parking logistics, decorations and enforcing COVID-19 guidelines. During the show, the moms were at each checkpoint to ask COVID-19 screening questions and guide cars to the next checkpoint.

Though there was a lot of work that went into the show, Sveta is glad the Saratoga community was able to watch the show live.

Badve hopes people realize how much work officers, choreographers, participants, parents and administrators put into it. Even with all the challenges, the show ended up having around 125 participants and each night was a sellout.

“I hope people can see how important BnB is to the Saratoga community and how it really does bring everyone together,” Badve said. “Most of all, I just hope people remember this BnB and how unique it was.”