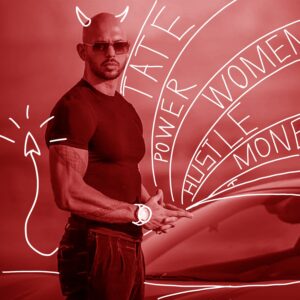 Photo by George Huang
Andrew Tate and his Bugatti

Permalink
The influencer’s success has had disastrous consequences on the younger generation by promoting extremist values.

Depression is fake. Women are powerless. They bear responsibility for rape, and most importantly, they belong to men.

These are all opinions viral influencer Andrew Tate shares. To say his takes are controversial (and wrong) is a blatant understatement, but controversy is precisely what he aims for — and what has made him rich. Tate boasted 4.7 million followers on Instagram and 14 billion views on TikTok when he was thankfully banned from the platforms in late August.

This was a sudden end to the exponential growth he relished by riding the flames of enraged internet users during the summer throughout all social media platforms. Meta confirmed that the reason for the ban was a violation of the dangerous persons and organizations policy.

As a 35-year-old millionaire who uses his influence and success to inject misogynistic values into millions of impressionable young adults and children while also profiting from a pyramid scheme, it’s definitely fair to say Tate was a “dangerous person.” His presence in his mere months of media terrorism spawned hostile mindsets that necessitate further action beyond a simple ban.

Who is Andrew Tate?

The former kickboxer has long lived in controversy. His first bout with bad publicity occurred during his brief appearance in the U.K. show “Big Brother” in 2016:  He was kicked off the show because a video of him beating his ex-girlfriend with a belt began circulating across the internet. While the video allegedly depicted consensual roleplay as Tate told The Sun, there is no denying the action was in character with the misogynistic and power-hungry persona he has since built around himself online.

After the incident eventually circulated in the media, Tate started a now-defunct model webcam business with his twin brother, Tristan Tate.

While entering the multi-million dollar industry on OnlyFans, Twitch and adult websites already seemed exceedingly lucrative, Tate significantly radicalized his business model: The models would fabricate stories, lie to their audience and fake their locations to young men online, giving them the idea that their relationships were genuine so that they would be more inclined to pay. In other words, it was a scam.

The brothers clearly knew young men were spending $4 a minute and tipping thousands more to help models with their fake surgeries and sick grandmothers, yet they felt no guilt. Tristan told The Mirror the details of the transactions were “in the fine print” and “it’s their problem.”

The twins garnered millions of dollars from this exploitative venture, granting them the lavish lifestyle they gloat about today, Bugattis and all. In 2021, deciding to capitalize off his own success, Andrew Tate founded his next scheme — Hustler’s University.

Hustlers University is marketed as an online course currently on its third iteration taught by Andrew Tate and his team of “experts” to help everyone become just like him: rich and powerful. For $50 a month, Tate provided classes on Discord on how to get rich quickly. However, it would soon be obvious that the only one getting rich quickly is Tate himself.

By using his own success as advertisement, Tate attracted a massive audience envious of the life he leads. In entrepreneur Charles Floate’s review of the business, the courses are “filled with not only basic business and financial errors, but also mainly promotional ways around affiliating the course itself.” While Hustlers University attempts to teach its members finance and business, the meat of the program relies on self-promotion and its pyramid scheme structure.

A pyramid scheme is a one where existing members recruit others for a commission in return, creating a cascade of money mostly benefiting the ones on top. According to The Guardian, members earn 48% commission for each person they refer to Hustlers University. Hundreds of Tate channels posting thousands of his video clips began to appear. It spread exponentially, peaking over the summer.

The members are encouraged to “stoke controversy to improve their chances of going viral.” One Hustlers University guide even states a balance of 60% fans and 40% critics is perfect to accelerate attention.

Of course, Tate is easily capable of abusing and snowballing controversy for his personal wealth. Encouraging millions of others to use controversy for their personal gains, however, can be disastrous to their social and emotional lives if used incorrectly, displaying an apparent carelessness for his fanbase and how they actually utilize his doctrine.

By July, Tate had billions of views on every social media platform and over 100,000 members in his so-called university. This amassed him over $5 million monthly and rising fast. And while Hustlers University’s money-making method is also extremely controversial and illegal in the U.S., the largest problem by far isn’t the questionable methods of getting rich; it’s the influence and emotional manipulation Tate has over millions of young kids.

Why Tate is dangerous in today’s media

Young and impressionable boys around the world are the most vulnerable to Tate’s influence. When they see Andrew Tate, they see a successful, authoritative “alpha male” who spreads what seems like an appealing truth to believe, worshiping and enforcing his doctrine.

Though Tate has attracted a small group of real misogynists who can validate their ideals under his dominance in the media, most of his followers didn’t start out as misogynists. They began to form these mindsets after being exposed to Tate content repeatedly online.

TikTok and Instagram, before the ban, only worsened the situation as pure controversy was the exact type of content the algorithm liked to promote to users. An Aug. 6 study in The Guardian found that after starting a brand new TikTok account, eight out of 20 videos concerned Tate. And once the user had watched Tate’s video, the algorithm didn’t stop promoting them, sometimes having lengthy strings of his videos in a row, all from different accounts multiplying from members of his pyramid scheme.

If Tate’s charisma, promises of riches and social media algorithms can infatuate full-grown adults, then minors as young as 6th grade are even easier to prey on. Not only do they lack the social maturity and experience, but many have not even learned about subjects of inequality, sexism or mental health from their parents or their schools. If the first time they hear about gender equality or mental health is from Tate, who to them has no reason to be doubted, it threatens to undermine their futures.

It seems some middle-school age boys have already started acting differently because of Tate’s influence. In the subreddit r/teachers where teachers share their classroom experiences, there are multiple top posts relating to Andrew Tate. Students have refused to read articles and books written by women, work on group projects with female classmates and have lost respect for female teachers. They also have started clubs and gangs devoted to “male domination.”

It is shocking and problematic that these actions are coming from mere middle schoolers who hate women simply because it was empowering while unequipped with the mental maturity to understand and differentiate such power.

So yes, Andrew Tate needed to be banned on these social media sites, with his clear violation of multiple community guidelines such as hate speech. But that’s not enough. His overall influence has already penetrated beyond the confines of social media and into the culture of our society’s youngest generation. Banning him simply doesn’t end the problem of misogyny and false social norms that were already infesting our culture before his eruption into the spotlight.

All the content from Tate still continues to spread via the members of his pyramid scheme at this moment, as they desperately continue to recruit new members — even with Tate himself banned.

A Tiktok spokesperson told KQED: “We will continue to remove violative accounts and videos, and pursue measures to strengthen our enforcement, including our detection models, against this type of content.”

But even so, the most imperative way to stop Andrew Tate’s influence is to talk to his audience. Parents: Talk to your children. Teachers: Talk to your students. Ensure that children are well informed of the dangers of malevolent online influencers like Tate.