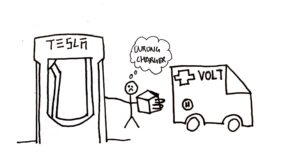 As part of his announced infrastructure reform, President Biden plans to invest $174 billion in the electric vehicle market. But pumping money into the market won’t solve one crucial problem currently plaguing electric vehicles — the lack of uniformity in chargers.

This quite frankly awful charging experience has slowed the mass-adoption of electric cars. Although electric cars can compete with their gasoline counterparts in both price and range, consumers cannot charge at every station as they can with traditional gasoline cars. Congress needs to pass laws that standardize the electric car charger before America ends up with a network of incomplete chargers.

Currently, a complex network of charging stations are popping up across America. There’s Tesla’s 20,000 superchargers, Rivian’s planned 3,500, and a patchwork of other third party charging stations. Since current chargers only work with certain cars, companies need to invest in their own network to offer a competitive charging experience to lure in consumers, who want to be able to fully charge their car in 31 minutes.

This competition to build proprietary networks is wasteful and inefficient. Tesla spends over $250,000 on each charging station it builds. Instead of a sparse network of proprietary chargers, a standardized charger would allow for denser and broader coverage.

A sparse charging network is no network at all. Hydrogen cars were once heralded as a competitor for electric cars, but only 9,000 have been sold in America since their introduction in 2012. In fact, they are only available in California, which has an extremely sparse network of hydrogen fueling stations. No one wants to buy a car that requires them to go out of their way to refuel. Instead, America should emulate Europe, which has already implemented a standardized charger and has over 200,000 charging stations.

The Biden administration should prioritize efforts to increase America’s charging network. Incentives can be provided to companies that build charging stations with a standardized charger. A standardized charger will bring us one step closer to California’s goal of banning gas cars by 2035 and going carbon neutral by 2050.

Instead of spending years and a fortune building individual charging networks, existing networks can be retrofitted to work with a standardized charger. If car companies pool their resources together to make one large charging network, we can make a denser and broader network, allowing for higher adoption. We’ll be one step closer to a greener future.