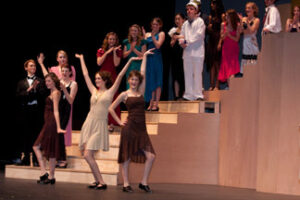 The cast rehearses for 'Anything Goes.'

Cast members of light-hearted musical “Anything Goes” set sail with the premiere of their long-anticipated show this Thursday. Other performances take place Friday and Saturday at 7:30 p.m., and there will also be a matinee on Sunday at 2 p.m.

“This show is different from others we’ve done in the past because of all the extra effort that has gone into directing each specific aspect of the production,” said junior Chaz Main, who plays Sir Evelyn Oakleigh, a wealthy Englishman with a quirky accent.

“Having the resources to be able to work with a full pit for this show has been amazing,” said Main. “I’m so thankful for them donating their time and skill to be a part of our production.”

With the two departments working as one, this production has been an opportunity to “present the talents of the many different students we have here at Saratoga,” Main said.

With all of the action taking place on board of the S.S. “American,” the production would never have been the same without a stunning set, all built entirely by the Department’s tech crew.

“I actually feel like I’m on a ship, but it has been a challenge to get used to all of the different heights and steps,” said senior Natalie Tkalcevic, who is playing Hope, a young woman who is engaged to Evelyn, but finds herself falling for another bachelor. “I’m afraid of heights so standing up on top has definitely helped me overcome my fears!”

Unanimously, actors expressed gratitude for the hard work that has been put in by the tech crew.

“Working on such an amazing set is great,” said senior Hannah Brown, who is playing Mrs. Harcourt, Hope’s zany mother. “It really helps you get into ‘boat mode.’”

As opening night inched closer, actors had to reach past memorized lines, blocking and quick costume changes to truly bring out their characters and create a picture on stage.

“The rehearsal process is all about coming together and producing something amazing,” said Brown. “I think we succeeded.”

Every production is a bonding experience for the actors. Tkalcevic said that for her, “Anything Goes” was “an opportunity to reach out to others and grow new friendships that [she] wouldn’t have had otherwise.”

The final few days before opening, also referred to as “Hell week,” are always tainted with full tech and dress rehearsals that tend to run late into the evening.

“Hell week is where 90 percent of the work gets put in,” said Main. “It’s also when the actors truly ‘get in the show.'”

Though Brown noted that Hell Week has its name for a reason, Tkalcevic in turn has her own sense of appreciation for these hectic times.

“People may think I’m crazy, but it’s fun to see the entire production come together,” she said. “Plus, free food!”

For the seven seniors in the cast, this will be their final production at Saratoga.

“It’s very sad to be performing in my last show,” said Tkalcevic. “Drama has always been my constant in high school and leaving is going to be a really difficult.”

“Anything Goes” is a lively production whose music and dancing are bound to leave everyone’s spirits high.

“I love the feeling you have walking away from [‘Anything Goes’],” Tkalcevic said. “There’s no better escape than seeing this show!”