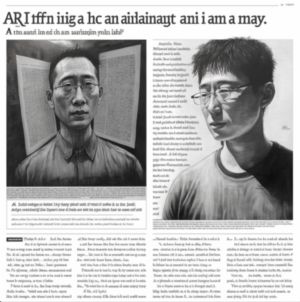 ai art
While the emergence of AI might seem threatening to artists, in reality there’s nothing to fear.

These are among the most recognizable images in art or human culture. In a word, they are irreplaceable. Advances in artificial intelligence (AI) are threatening the once-indomitable station of artists. Will AI just be another creative tool like digital cameras or filters, or will it replace artists entirely? Our bet is on humans.

AI art has been developing for decades, but only gained mainstream attention a few months ago. Though these images were originally smeared amalgamations, nearly unidentifiable without the prompt used to generate the image, AI is now able to create incredibly detailed images that make spectacular use of light, shadow and color. Popular software like Dall-E, Midjourney and Dream are seeing an unprecedented rise in popularity, with Midjourney’s website in particular receiving three to four million visitors a month.

With the rise of AI art comes new innovations in the field. Not only is the artwork generated by the software more convincing, but some AI art programs can also emulate the styles of specific artists. As AI art develops, the attention to detail also improves, further muddling the line between AI-generated artwork and manmade artwork.

There are still some things AI art cannot do. While human artists tend to use the most detail on the important parts of their composition, computers currently have no way of anticipating the interpretation of their images by a human audience, so AI-generated images are generally equally detailed everywhere. This points to a bigger weakness in AI: Since they follow a written prompt to generate artworks based on thousands of existing images matching the prompts, they are derivative rather than being truly creative. Human artists are deliberate in their choices for a piece, and often use their platform for sociopolitical commentary or other points they want to convey.

Additionally, AI art still has imperfections. There are several types of image artifacts one can look for, such as the remnants of signatures by human artists or disfigured hands (hands are notoriously hard to draw),  that are a dead giveaway that an image is AI-generated. Of course, with further development, many of these problems will be solved, along with compositional problems that require people to generate images hundreds of times to find the desired effect. Soon, AI art generation will be streamlined, allow for incredible specificity and become almost indistinguishable from digital art created by humans.

This does not necessarily spell doom for digital artists. While there has been widespread coverage of Jason Allen, a tabletop game designer, winning first place in the Colorado State Fair’s art competition with an AI-generated artwork, a local contest is not the arbiter of museum-level art.

The backlash he received was unwarranted as well: He didn’t break any contest rules. More importantly, art evolves along with human culture, and the quality of art is not dependent on the effort put into it. An acrylic painting is not inferior to an oil painting just because acrylic is an easier medium to use.

Digital art is not inferior to physical mediums just because computer programs provide many convenient functions, such as undoing actions, filling large areas, or adjusting large areas of color. The Pop Art movement of the 1950s and 1960s is not an inferior representative of human culture compared to other eras in art history just because it focused on the mundane and was mass-produced. Similarly, though Allen’s “Théâtre D’opéra Spatial” is not a particularly inspiring piece, the fact that it was generated by an AI is not a valid criticism.

Over the years, great artists have pioneered their own artistic styles. It is easy to tell a Picasso apart from a Dali, a Manet from a Monet, a Kandinsky from a Kollwitz. Since AI art is generated from existing images, it cannot create new art styles in any significant aspect. One of the worst insults to an art piece is to call it “derivative,” or a copycat of another artist’s work — and all AI art is derivative. This is where human artists have the edge.

What is the point of art if not to say something new? For example, Marcel Duchamp’s “Fountain,” a ready-made installation consisting of a urinal he signed under a moniker, was met with shock and scandal in the art world at the time in 1917, but is still remembered as one of the major turning points for attitudes about art. For better or worse, an AI could never come up with an idea as ludicrous as this. It is extremely effective at producing art we have already seen, but it cannot produce original, groundbreaking pieces — the art that matters.

Allen’s “Théâtre D’Opéra Spatial” will at best be a footnote in art history, because it does not introduce anything new. His prediction that “Art is dead, dude. It’s over. AI won. Humans lost,” is rather arrogant for someone who won a paltry sum of $300 from a local contest.

The online debate over this topic has become very heated in the last few months, with artists viciously attacking AI art and some also vigorously defending it. Many artists fear that AI art will eventually make their craft obsolete, mirroring the overall fear of AI art acting as competition for humans. This fear isn’t unwarranted, as situations like this have happened before — consider the Industrial Revolution, where many traditional artisans were swiftly replaced with factory machinery.

Art contests could create a separate category for AI-generated works, requiring digital artists to send recordings of their creation process to prove their submission was made by a human, but what’s the point? At the end of the day, art is most memorable when it offers a new insight, challenges norms or acts aesthetically striking. The amount of effort put into the creation does not matter. We tend to humanize AI or see it as competition, when in reality it is just another tool, like paper, ink, cameras and computers.

As we move into a more digital age, it is inevitable for art to evolve along with us. As it has done countless times in the past, art is now entering a new era with a digital medium of near infinite possibilities. Like factories, AI art will get rid of the “manual laborers” of art, just as photography diverted the art world away from portraiture and realism. Yes, the Twitter artists charging a flat rate for commissions may suffer, but because AI will always create art within the limits of human imagination, the limits of creativity will always be pushed by humans.