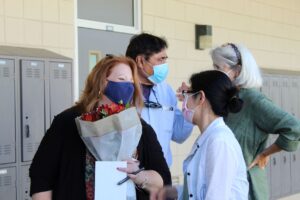 retirement, school staff
With the sweetest salutations, the Saratoga Falcon would like to congratulate Kerry Mohnike on her retirement after her 30-year stay at Saratoga High School.

When assistant principal Kerry Mohnike started teaching here 30 years ago, much of present-day Saratoga High did not exist. There was no state-of-the-art science wing. There was no football stadium, let alone lights on its field. The McAfee Center was not yet built, and there was no blackbox theater. Many of the trees on the quad were young and nowhere near their current height.

In her years working as an English teacher and administrator, Mohnike saw the school grow from just 850 students with a Caucasian majority to 1,450 at its peak with an Asian majority (the school is now closer to 1,250)

On Sept. 7, Mohnike retired with 20 years of teaching English and 10 years as an administrator under her belt. The previous Friday dozens of staff members showed up to wish her well at a surprise retirement party.

“I got to a place where I was almost old enough to retire,” Mohnike said. “I’m going a couple years early. It’s time for new people to come in and do new things.”

Mohnike mentioned that she feels comfortable and secure in her decision to leave now, as the school is filled with “great leadership, students and teachers.” Mohnike did not feel “as needed” as she did in years past.

“Evanoff is rock solid. You guys are going to be really happy and lucky,” Mohnike said. “And that’s how it makes it easy to leave.”

She began her career as an English and journalism teacher here in 1991. It was her first full-time job, and she immediately fell in love with the school, its students and the community.

“I’m the kind of person who really wants to dig my roots in and be a part of a school for the duration,” Mohnike said. “I didn’t want to go round and round back. I knew a good gig when I saw it.”

In her three decades, she went on to hold numerous leadership roles and be a part of most areas of the school.

Although Mohnike loved working at Saratoga High, her future at the school was initially not guaranteed. In the first few years, student enrollment numbers were so low — around 850 students at the time, according to Mohnike — that the school board was considering closing down the school and enrolling all Saratoga High students at Los Gatos High School. Mohnike feared she would be laid off due to the enrollment crisis, but the Saratoga community was adamant on having its own high school, the school grew and Mohnike kept her position and never looked back.

She said that she loved the collegial environment of the staff and hardworking student culture. Mohnike noted that, at Saratoga, teachers did not need to deal with issues many other public schools face, such as behavior issues and truancy; this allowed teachers to devote all their effort to teaching.

“If you come here to teach, you get to teach — you don’t have to do other things like classroom management,” Mohnike said. “I loved brainstorming and creating lessons with my colleagues, and then delivering lessons and then seeing the sparks go off.”

Mohnike believes that Saratoga High has a “special group of students” — students who are genuinely passionate and motivated. Mohnike and the teachers have faith that these students, regardless of career path or interests, will be successful in their years to come.

“Most of the students already have a passion for a career path or something,” Mohnike said. “That drive among the students has always been there ever since the first day I started here.”

Mohnike said now was the perfect time to retire, and she plans to pursue her other interests, including the dream of selling screenplays she has written. As an administrator, Mohnike worked long nights and had little time to write screenplays or pursue other passions, so retiring allows her the time necessary to carry out both the writing and business aspects of screenwriting, such as traveling to Los Angeles to pitch her ideas.

“In retirement, not only can I write, but I can actually do the things you need to get a script sold,” Mohnike said.

One of the first movie scripts Mohnike plans to sell is based on the life-story of the school’s retired librarian, Tibor Szalay (also husband of Nada Macesic, a classified staff member), who escaped from the Iron Curtain in Hungary.

Colleagues said Mohnike leaves a big legacy as she retires, not just on the campus as a whole, but also on the individual students she taught. Guidance counselor Eileen Allen, who was in Mohnike’s junior year English class and has now been partnered with Mohnike for five years, called Mohnike a life-long learner.

“I tell people this all the time — she was probably one of the top three teachers I have ever had. She’s always been a passionate teacher, and very warm and approachable,” Allen said. “She fostered really interesting conversations in her classrooms.”

Mike Tyler, who took over Mohnike’s position as journalism adviser when he joined Saratoga High in 1996, called Mohnike a mentor for the entire English department.

“She’s very student-centered, and I really appreciate that about her,” Tyler said.

Mohnike said that she will greatly miss the day-to-day interactions with her colleagues and students, and hopes to remind students to learn to follow their own path without the “race to nowhere” mentality.

“Be kind to one another,” Mohnike said. “Life is challenging, but if people operate out of kindness, they can go a long way.”