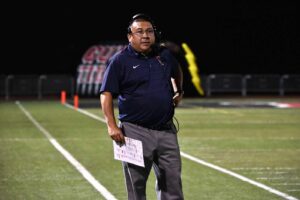 Lugo examines his playbook as he decides the football team’s next play in a game in fall 2020.

After 10 years as the school’s athletic director, Tim Lugo recently announced he is stepping down at the end of the year. He will remain at the school as the head football coach and a full-time P.E. and Health teacher.

Lugo, now in his 13th year at the school, said the main reason he decided to resign was that the job grew to entail more roles and responsibilities than when he started

“I started gaining weight and I wasn’t exercising, so I just felt that for my own personal benefit, it was time for me to step away,” Lugo said.

Following his resignation, he has started to get back in the gym, and he said that he already feels his fitness coming back.

The district has hired P.E. teacher Rick Ellis to take over the athletic director role for the next school year. In order to ease the transition, Lugo plans to invite Ellis to the next athletic director meeting, so he can see how the meetings are run; he will then work on guiding Ellis through the main problems that he will come across.

“He’ll be responsible for knowing our system for scheduling games, scheduling officials, knowing who to call if officials don’t show and getting comfortable with the athletic director bylaws,” Lugo said.

He also wants Ellis to take over the upcoming eighth grade sports’ night, which will occur in an online setting in late May, so that incoming freshmen know who to go to when they have questions next year.

Lugo said that, in previous years, he had long conversations with former principal Paul Robinson, who convinced him not to leave the job. He ultimately decided to stay longer when Greg Louie became principal to help stabilize a key part of the school as Louie settled into his new job.

However, because of the pandemic, Lugo said he had to do the “craziest thing” he’s ever done in his career: trying to fit nine months of sports into four months this spring. While he was extremely pleased with how the seasons have turned out, he had to do a tremendous amount of work behind the scenes as he attended countless board of manager, athletics directors advisory committee and executive committee meetings. On top of that, he also was the lead athletics director for the Santa Clara Valley Athletic League, which required Lugo to frequently meet with the athletics directors of other schools in the league and address their questions and concerns.

Lugo realized how the job had essentially become a full-time profession for him, prompting his realization of needing to step down and take on a lesser role.

“Giving up this job has been like the weight of the world has come off of my shoulders,” Lugo said.

Over the past decade, Lugo has had several accomplishments that he is proud of, the biggest one being hiring most of the school’s coaches.

Other than coaching, Lugo also fondly remembers the baseball team winning league tournaments and going on to CCS in the early 2010s, the volleyball team winning NorCal tournaments a few years ago and the cross country team winning a Division 3 championship. He also is proud of the growth in the lacrosse and field hockey teams over the past decade.

With his new position as Health teacher, P.E. teacher and head football coach, Lugo is looking forward to interacting with freshmen as he usually would not get the opportunity to do so outside of the football team.

He also looks forward to spending more time with his football team and working closely with them throughout the season. “It’s been a long time since I’ve been able to give that sport 100 percent of my attention,” Lugo said.

He plans to finish moving out of his office by the end of the semester, and will take advantage of his newly found free time by spending the summer resting, having fun and spending more time with his kids.

“I’m just really excited to teach a class and not worry about my phone going off with someone asking what time the game is tonight and who to call with a certain question,” Lugo said. “I just want to go out there and teach.”