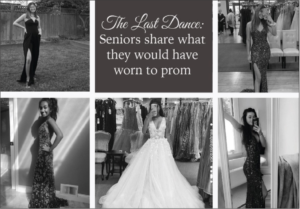 Due to COVID-19 restrictions, senior prom had to be moved from its original date, May 30.

As all events for the current school year have been canceled, ASB director Matt Torrens and the senior class office are looking into different avenues to hold prom for the graduating Class of 2020 in December.

“Seniors have been pulled away from each other at a critical moment of their school career; at the climax,” Torrens said. “This is a chance to bring everybody back together, have some laughs and enjoy each other’s company.”

The details of the event are currently unknown, but the idea is that after students come home from college for winter break, the current senior class office and Torrens could organize an event on campus for seniors to reminisce and share new experiences.

Torrens said that holding the event in August is unlikely due to shelter-in-place regulations, so their next step is to look later on in the year. If December is not possible, they will consider moving prom to springtime or early summer of 2021.

Torrens said that the prom will ideally be limited to only seniors in order to ensure senior class funds are not unfairly used for a multi-grade event.  Extra details are still being worked out, such as if a senior could invite a junior or somebody else. Torrens added that they would need to have some control on who’s going into the on-campus prom.

Despite the delay in prom, some seniors like this proposal. Although a later prom means that many of them will have moved onto college, it still provides a lost high school experience.

“In concept, a later prom sounds fun, and I would definitely go,” senior Chris Feng said. “Although, it’d probably be kind of awkward, seeing as how everybody would have been separated for so long — everybody would be different.”

On the other hand, other students, including senior Callia Yuan, believe that this delayed prom will only serve as an unnecessary use of the senior class funds gathered over the course of the year.

“A lot of universities are already hosting redemption proms anyways, which I feel is more valuable than if Saratoga were to hold one,” Yuan said. “I mean, it’s a cute idea I guess, but I still probably wouldn’t go.”

Instead, Yuan believes that senior class funds should go toward a later graduation, delayed senior nights and even a substitute senior sunrise. These events would be unique to Saratoga and would avoid being redundant with universities like Dartmouth and Columbia, which are already hosting proms, Yuan said.

Students are free to take different stances on this redemption prom, but unless the event proves to be unpopular or inconvenient, the senior class officers hope to use part of the $25,000 within the senior class bank account on food trucks, the DJ and possibly a separate venue for the prom, said Torrens. Additionally, these funds would help pay for a delayed senior class gift, which is traditionally a gift or improvement, such as new murals, given to the school by graduating seniors.

Since prom usually involves a senior service project, some money in the class account will also be spent on this activity. Torrens said that he and the current senior class office are talking about buying all seniors a tile and then having them decorate it based on their experience at the school or the college they are attending. Afterwards, they would put them all together on a wall somewhere on campus.

Even if prom is held months later or a year later, the senior class officers and Torrens are determined to hold the event. Torrens said that although the seniors are at the end of high school and soon they will start a new stage of their life, the prom aims to bring the class back together to “celebrate the challenges they’ve gone through together.”

“Not only is it a substitute for prom, but it’s also an effort for everyone, even when they are in college, to come back together and be able to reunite again,” Torrens said. “These seniors have that unique opportunity to have an event like COVID-19 that has united them in a way we’ve never seen another class unite, and ironically, the uniting factor has been being separated from one another.”