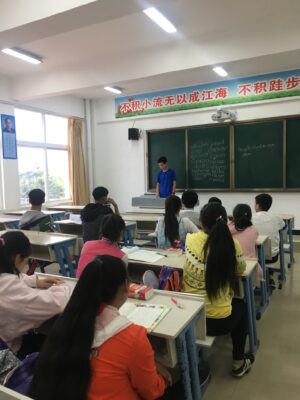 7,300 miles away, Tammy Li, a sophomore attending classes at Mojiang Secondary School in the Yunnan province in China, listened intently as SHS sophomore Joshua Fang spoke to her in English.

As a student of the rising Aspiring to Create English (ACE) club created under the leadership of junior Anthony Qin, Chinese students like Li can communicate and learn from Saratoga High students like Fang at the click of a button.

Besides the usual duties of doing homework and studying for tests this year, Qin has been leading a club whose mission is to provide underprivileged teens living in Yunnan, the opportunity to learn English. ACE club members use the popular social media platform WeChat to communicate with their overseas peers.

Qin’s inspiration for ACE was the summer camp he has been attending in rural China where they teach kids English. “When I came back I felt like we should stay connected with them because they don't have the same resources as other students across China,” he said.

There are around 15 active members in ACE, of whom about 10 are fluent in Mandarin. Some have had to learn English as their second language and can identify with their counterpart’s struggles.

In most areas of Yunnan, a good education is a rare privilege held in high regard, and children are often forced to work in order to help their parents sustain their family.

Sometimes, families end up spending more than they earn, and many earn only a few thousand dollars or less every year. As such, living conditions are a struggle, and children are usually unable to receive a proper education until late pre-adolescence, if at all.

In the English departments of most schools there, students rarely ever receive a proper education.

“Anybody at school here has way better English pronunciation and knowledge than the teachers there,” Qin said.

Li said she finds participating in conversation with members of ACE to be beneficial.

“I have learned some difficult lessons in English, how to communicate with others and how education systems in America function,” Li said.

During his summer camp, Qin and his friends passed out flyers to the students they were teaching. When summer ended, he made a huge WeChat group so potential students could subscribe and get notifications from their tutors.

ACE, which is sponsored by the Qin Foundation, a nonprofit organization founded by Qin’s parents that primarily focuses on providing money for underprivileged areas in China, was started in early 2019. It has around 30 members, including officers Qin, juniors Amy Zhang, Veronica Chen, Jenning Xuan and sophomore Cici Xu.

Both Xu and Zhang immigrated from China to the U.S. in recent years.

At first, setting up a schedule for video calls proved to be an unexpected hurdle. Due to not only the time difference, but also the Chinese students’ schedules, finding common times can be tough.

“We call for half an hour a week or biweekly, usually on weekends,” Qin said. “They also text us throughout the week and send pictures of their problems so that we can work with them.”

Li also noted the time difference, which is about 16 hours, as a challenge, but brought up the benefits of having a tutor so far away.

“There are pros and cons,” Li said. “I'm in China, so I don't know much about some festivals in the United States, but I can learn about them through the teacher's introduction. However, because we’re in different countries, the time difference is pretty difficult to overcome.’”

As a boarder, someone who lives on campus, Li is not allowed to use her phone in school. Coupled with a tight school schedule, she said she “rarely has time to learn from a teacher in the United States; I can study on Sunday, but sometimes we may have to make up lessons because the teacher is too busy.”

The students in Yunnan are generally sophomores and juniors who are preparing for the gaokao, a cumulative final for Chinese high school students that determines which college a student will attend and essentially their life.

Students spend hundreds of hours preparing for the exam; it is the most important test of their lives. In no small sense, it will determine what college and what field of study they will pursue for the rest of their lives. And unlike the SAT, it is the lone criteria for college admissions in China, making it so much more important for students to score well.

Some of the topics covered by the gaokao are English, math, Chinese, and a subject depending on whether a student chooses to pursue liberal arts or the sciences. Many of ACE Club’s students are from cities in Yunnan where there are not a lot of teachers who have a sufficient understanding of English. By establishing weekly tutoring calls, Qin hopes to better prepare these students for the final exam.

Students in cities like Shanghai and Beijing have much more knowledge and much better resources to study for the gaokao compared to those in rural areas such as Yunnan. Qin hopes to somewhat level the playing field such that these students stand a chance against their competitors in the cities.

Qin originally hoped to start his club second semester last school year, but because it was too late, the club was officially established this year. Since the students and tutors are similar in age, both parties are able to learn about their different living conditions and languages.

By bringing this club to school, Qin hopes to educate others on the reality of the students’ circumstances for a good cause.

“You just notice how privileged you are to live here in Saratoga, all the things you have that you take for granted like school,” Qin said. “Even though their parents need them for farming, they insist that the students go to school because that way they can get themselves out of that impoverished condition. For them, education is really valuable.”