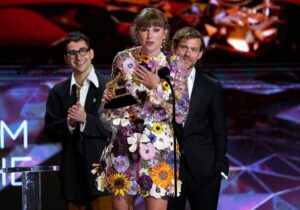 Taylor Swift receives the Album of the Year award for her album “Folklore,” making her the first woman ever to receive three awards in this prestigious category.

Most notable wins include Taylor Swift joining big names as she became the first female to win three Grammys for Album of the Year, Beyoncé holding the most Grammys ever as a female artist and Harry Styles winning his first Grammy.

On March 14, celebrities and the public alike watched the 63rd Grammys from home, breaking from the usual grandiose affair. According to the Hollywood Reporter, the Staples Center, which normally serves as the venue for the annual awards show, was instead used as a backdrop for an open-air tent that had an outdoor stage, socially distanced tables and masked guests.

Many people applauded the Recording Academy, the organization that hosts the Grammys, for managing to host an in-person event while following CDC and state COVID-19 guidelines.

The event also saw many historic wins. After winning her 28th Grammy for her R&B performance of “Black Parade,” Beyoncé is now the female artist to hold the most Grammys. Her other awards for the night included Best Rap Performance and Best Rap Song for “Savage.”

Taylor Swift took home the biggest award of the night, Album of the Year, for “Folklore.” Previously, she had won for “Fearless” and “1989.” She is the only woman ever to win this Grammy three times, and this award has put her on a level with greats like Frank Sinatra, Stevie Wonder and Paul Simon.

Other notable moments included Billie Eilish getting Record of the Year for the second year straight with “everything i wanted” and Harry Styles getting his first Grammy for Best Solo Pop Performance for “Watermelon Sugar.”

But like most other award shows, the 63rd Grammys endured criticism before and after the event.

Immediately after nominations were announced, the Weeknd, who released his chart-topping album “After Hours” in March 2020, tweeted his distaste at the fact his album received no nominations despite its popularity.

“The Grammys remain corrupt,” he said. “You owe me, my fans and the industry transparency.”

According to Cosmopolitan, the Weeknd’s single “Blinding Lights” made history as the first song ever to be on the Billboard’s top 10 list for a year. “Blinding Lights” was also his closing song when he performed the Halftime Show for this year’s Super Bowl.

Given how well liked his album was, it is understandable the Weeknd would be upset his album received zero nominations. In a statement to The New York Times, The Weeknd said he would stop submitting music for Grammy nominations.

While the Weeknd’s situation is unfortunate, his predicament is not unique. Artists of color, most notably Drake, Kanye West and Frank Ocean, have long criticized the Recording Academy for not giving them the credit they deserve on their work.

Other famous artists took to Twitter to voice their frustrations at the Grammys. Singer Zayn Malik insinuated that the Grammys would only award and nominate singers who vocally supported and helped the Recording Academy. Rapper Nicki Minaj also recounted how in 2012, a white male band, Bon Iver, received the Best New Artist award despite her incredible success and fame that year.

These situations and many more show how the Grammys, like many other award shows in America, does not adequately recognize people of color for their accomplishments.

While the Recording Academy did a great job organizing a pandemic-safe show, and it was enjoyable to watch so many heartfelt acceptance speeches, the Academy snubbing these deserving artists put a damper on the whole event.

In the next few years, the Grammys will have to fundamentally change its outlook on music and nominations processes if it truly wants to be a diverse and representative awards show.