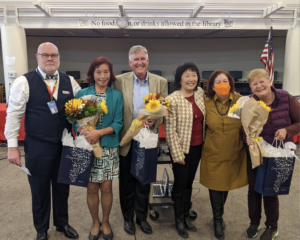 Photo by LGSUHSD
Superintendent Bill Sanderson, board trustees Cynthia Chang, David Guidry, Katherine Tseng and Theresa Bond and a community member (on behalf of board trustee Peter Hertan) honor retiring and outgoing board trustees Chang, Guidry and Hertan at the Nov. 15 board meeting.

Permalink
Incumbent David Guidry was voted out after falling short in voting.

Incumbent David Guidry failed to win re-election and former Los Gatos Union School District (LGUSD) board trustee Chris Miller fell short in voting, paving the way for three new board trustees. The trio will be inaugurated during the Dec. 13 board meeting at LGHS.

The election was one of the most-watched school board races in recent history and marks a significant shift in power toward retired teachers and active stakeholders, away from established and incumbent figures of the board. For many teachers, parents and student leaders, it served as a way to scale back the tensions in the board over the past two years over issues such as the bell schedule, employee compensation and the overall direction of the district.

Voting trends showed a clear preference for teachers and parents: Retired teachers — Chen and Shultz — will now make up two seats of the board and recent or current parents — Davies and sitting board trustee Theresa Bond — will also hold two seats. First-term members — Bond, Chen, Davies and Shultz — will make up four seats, or a supermajority of the board, for the first time in recent history.

This is a significant change from the board’s current makeup, which includes no former teachers, two multi-term members and two parents of past graduates.

Guidry and current board trustees Cynthia Chang and Peter Hertan — the latter two are retiring from the board — were honored by the district at a reception during a regular board meeting on Nov. 15. Chang served a total of six terms, or 24 years, in her tenure since 1998; Guidry and Hertan each served one term, or four years, in their tenures since 2018.

In a press release, superintendent Bill Sanderson said, “It has been an honor to work with these dedicated trustees who have been such an instrumental part in shaping this district.” He added that he is “[looking] forward to beginning the next chapter with both our new and experienced trustees.”

Teachers at the school responded to the election with excitement. According to DTA president Jennifer Young — a teacher at LGHS — the DTA sent over 12,000 mailers to voters’ homes, knocked on over 200 doors and made over 500 phone calls.

“We feel that these candidates will support students and teachers and we are ecstatic that all three of our endorsed candidates will be on our school board,” Young said in a statement to the Falcon. “We look forward to working with all five of our board [trustees] in the coming years.”

Some students also welcomed the change in leadership from the current board, which presided over tumultuous periods that saw students repeatedly speak out against decisions regarding school reopening, bell schedules and student mental health.

Senior Mason Wang, the ASB president and student board rep, said he was happy to see teachers get “better representation” on the board and is excited to get to know the new board trustees better, though he noted he would miss Guidry. Another student, senior Arshi Chawla — a co-founder of the Student Senate district advisory group — shared similar opinions.

“I’m happy that our institutional board members have been replaced with people who are part of the community,” Chawla said. “With more teacher and parent voices on our school board, I hope this will mean more receptivity to student input and solutions to issues like teacher pay.”