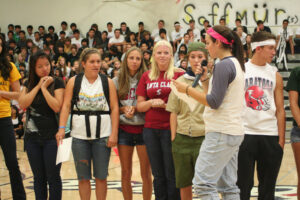 Going the furthest away from home are swimmers Matt Murray and Brad Murray, attending University of Virginia and Georgetown, respectively. Fellow swimmer Ben Hinshaw will be at UC Berkeley in the fall. After recently breaking the national
public high school record for the 400m relay, swimming DI is no big deal for these three.

The girls’ tennis team also produced three collegiate athletes. Lindsey Marsh has signed with the DII Cal Poly, San Luis Obisbo team, and Kara Wang will play DIII tennis for Pomona College. Kelly Lamble will play for Santa Clara University on a scholarship. As a junior and senior, she played highly competitive club tennis instead of playing for the school team.

SCU also offered water polo player Alison Norris a partial scholarship, and she signed on to play for them in the fall due to the DI athletes and the friendly atmosphere.

“Santa Clara is a top 10 team, so I will be playing at a high level,” said Norris. “The coach is hilarious.”

Attending the University of the Pacific in the fall, Stephanie Douglass was recruited to play field hockey goalie. She is the only field hockey player who has signed on to NCAA athletics, but some other players might walk on to their schools’ intercollegiate or club teams.

Kiersten Dolbec signed on to DI UC Santa Barbara early in the year, originally just for high jump. But after the UCSB coaches started watching her, it became apparent that her athletic talents were also useful in volleyball, leading her to be a dual-sport athlete for the Gauchos.

“I was being recruited for track and all the coaches had to watch me, and the volleyball coach just all of a sudden heard of me,” said Dolbec. “Then she called [my current volleyball coach] and they offered me a scholarship.”

Also heading south is Alan Menezes, a cross country and track runner who has brains and speed. Menezes will be running track for the academically elite California Institute of Technology, a DIII program. Runner Katie Nast will be attending University of California, Davis, definitely running for DI track and hoping to walk on to the cross country team.

Lily Dickson, a rower for the Los Gatos Rowing Club, will start off her first summer after high school by missing her graduation. Her crew team has qualified for nationals, a well-earned accomplishment that helps her prepare for rowing on a scholarship at University of California, Davis next year.

“I am excited to have that really close group of teammates in the beginning of college when I am first meeting people, said Dickson. “Everyone is so nice in Davis.”

Wrestlers Jasper Loren and Nathan Nguyen will be continuing on into college. Nguyen will be wrestling at West Point, while Loren has three offers and has yet to decide where he will attend.

Joey Avery, a pitcher, will be playing DII baseball down at the UC San Diego. Katie Gasik heads the opposite direction, moving north to Chico State to run the 400m hurdles for the school’s DII track team.

“My entire family went there, and my dad actually ran track [at Chico State],” said Gasik. “I got into the school early for [track] and I get to stay in the athlete’s dorms.”

Assistant principal Karen Hyde expressed her excitement for these 15 athletes, saying that it “speaks volumes about our superior kids” at SHS.

“Saratoga is always knowno as the academic school, … [but] we’re not the athletic school,” said Hyde. “This shows people that we’re not just brilliant; we’re also brilliant athletes.”