A background on independent films
September 26, 2008 — by Kavya Nagarajan

Every year, six major production companies, including 20th Century Fox and Walt Disney Pictures, make most of American films released. These corporations also earn billions. Usually a majority of the films that make the list of top 100 films each year are produced by one of these companies.

However, occasionally there are some films that start out small, making their premieres at film festivals, and make their way to the top. These films are called independent films, otherwise known as indie films, and are not produced in the Hollywood studio system. Some examples of famous independent films are Little Miss Sunshine, Crash, and The Queen. It may surprise you that these movies made their way to the top, despite not being produced by big companies.

Senior Neyha Bhat sang a solo at a Chinese opera performance at Le Petit Trianon Theatre in downtown San Jose on Sept. 13, quite a surprise considering Bhat is of Indian descent and does not speak the language.

The lunch bell rang on Sept. 18, finally releasing hundreds of restless students from their classes. As usual, they scurried to the quad steps with the intent of reaching the cafeteria first and avoiding the long lunch lines. However, they were met by an enormous mob of classmates surrounding the center of the quad, surveying colorful posters bearing the names of dozens of clubs.

Saratoga High hosted its annual Club Day on Sept. 18. Although upperclassmen had already been introduced to a variety of clubs during their high school experience, freshmen who had never experienced this before, were overwhelmed by the many clubs that their new school had to offer.

The usually deserted downtown was crowded with small groups of people. Students dressed in red gestured to different stores while the sound of traditional Chinese instruments blew sweet melodies over downtown. Children dressed in Chinese robes giggled with excitement, paper lanterns dangling from their wrists.

Walking into the school library this year, students will find a new and improved resource to take advantage of—the newly renovated Research and Writing Center. According to Principal Jeff Anderson, the renovation was funded half by the school and half by the Saratoga High Foundation, a parent group that helps support the school.
According to district application support analyst Julianne Yeaman, the old computers were “outdated” and crashed often. There are now 62 new Dell PC’s running on Windows XP in the center. 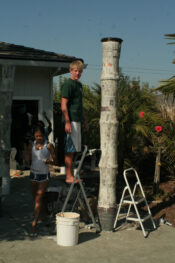 Last year, the sophomores lost to the freshmen in Homecoming, putting the class of 2010 in last place. The current sophomores, however, believe the same thing won’t happen to them, especially with the city of Rome as their theme.

Although talk about building a media arts center began nearly a year ago, the blueprints have now been completed, and the school will soon be moving to the next step of the approval process.

The main reason for the delay in the structure that will be home to the school’s new Media Arts Program (MAP), as well as the other various media arts classes at the school, is that many changes have been made in the architecture, pushing the eventual building date further back.

Saratoga High has historically been one of the highest ranked public high schools in California in terms of Academic Performance Index or API scores. This year, the school had a record 25-point increase in its API score, going from 903 in 2007 to 928 in 2008, outperforming rival schools like Lynbrook and Monta Vista to become one of the top three schools in the Bay Area and the top performer in the Santa Clara County.

The school’s API scores have been dropping in the past couple of years, which makes this increase much more remarkable.

While the other classes got to confer and choose their themes for Homecoming, the freshman were left with the one theme that nobody seemed to want—Atlanta.

Imagine walking down a dirt road barefoot among shards of broken beer bottles. Imagine losing a friend to enemy fire every day. Imagine not being able to see your family again. Imagine all this when you’re only being nine years old.

In Uganda, 1.8 million children are being forced from their homes to fight against the Ugandan army. For them, it’s either kill or be killed. A rebel group named the Lord’s Resistance Army (LRA) led by Joseph Kony has taken most of these kids from their homes at the ages of 5 to 14.Not only has Kony destroyed lives, he has destroyed schools. Most of the kids in Uganda don’t have a plan for the future. Lucky for them, hope is on the way.