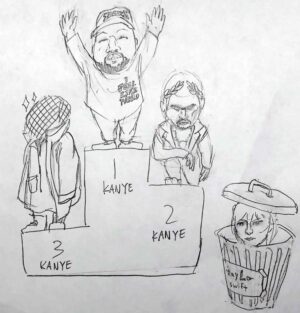 Kanye West, Top 10
My opinion of the GOAT’s best songs.

Barely counting as a rap song, “Lost In The World” has a colorful, indescribably beautiful instrumental that slowly builds up until it fully blooms a minute into the track.

The cheesy end credits to an otherwise experimental and industrial-sounding album. Kanye professes his love for Kim Kardashian over a sample by the Ponderosa Twins Plus One.

Humorous lyrics over a groovy, simplistic beat. Ends as a chill adlib track with backup vocals by André 3000.

Both artists deliver great verses in this upbeat song. The beat, produced by Just Blaze, makes amazing use of a Curtis Mayfield sample.

The guest artists and pulsing beat create a woozy atmosphere, creating a perfect background for a short rap verse and a spine-chilling guitar solo by producer Mike Dean. However, Bon Iver is a bit of a snake for collabing with Taylor Swift to be honest.

Abandoning his usual bravado, West reveals his insecurities in a stream-of-consciousness style song. Each verse is punctuated with a heavenly chorus by Sampha, who concludes the song with his own verse as well.

A very emotional song. Guest artist André 3000 addresses his late mother in his verse, while Kanye raps about how his childhood affected who he is today. The song ends with a recording of rapper DMX, who died in 2021, comforting his crying daughter on an amusement park ride.

The best song of all time, period. Producers Mike Dean and Bink! masterfully sample Smokey Robinson to create a heavenly beat. Kanye’s verse, which is him reminiscing about a past lover, smoothly transitions into another mind-blowing guitar solo by Dean, which sets up the best verse of Rick Ross’s entire career.