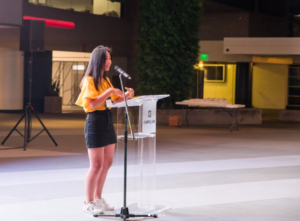 Permalink
Senior Anouk Yeh explores her political interests through poetry, sees it as an emotional outlet and most loves the accessibility and sense of community that come with it.

“The girls in my grade are magic but sometimes / even magic falls short from grace / last year, a girl in the grade was assaulted by a varsity football player / that day, there was no magic in the hallways.”

Those were the lines from a poem performed by senior Anouk Yeh in spring 2021.

Later that day, Yeh was inaugurated as Santa Clara County’s first Youth Poet Laureate (YPL). She said what was most exciting about the experience was the other people there: fellow youth poet applicants and the man who MC’d the awards, Mike McGee.

“It was very full circle,” Yeh said. “[McGee] was there when I had performed my very first poem [in 2018] and he’s also the person that announced my laureateship. Throughout the years he’s been such a big support system for me and someone I really look up to in terms of how he uses writing for the community.”

At the time, Yeh, an editor-in-chief of The Falcon this year, had been writing a story on an April 2021 NBC Bay Area report which found that “since last year, 134 Los Gatos — Saratoga Union High School District (LGSUHSD) students and alumni have come forward — mostly on social media — as survivors of sexual abuse and harassment.”

This inspired her poem, “an ode to teenage girls,” which celebrated the strength of students who had spoken up about their previous sexual abuse experiences.

“They still had that optimism even though everything else in the situation points to pessimism, sadness and disaster,” Yeh said. “That’s so crazy because I feel like that fire is something unique to young people, especially teenage girls.”

The process of becoming a YPL consisted of two rounds of applications. In the first round in February 2021, applicants were to submit three poems, their resumes and answers to questions regarding why the applicant is interested in becoming YPL and what they would do in the position.

Yeh submitted “an ode to teenage girls,” “On the Back Porch” and “Color Wheel Connotations.”

“One thing I was really thinking about when I was filling out my application is who gets to tell their stories and what stories are listened to in the context of general American media,” Yeh said. “As a young woman of color, there’s this sense of if we’re not the ones advocating for ourselves, we’re not visible enough to the point where other people would be advocating for us.”

Twelve teens from a pool of 40 applicants were selected as finalists; Yeh was ultimately chosen for the job.

As the inaugural YPL, Yeh has been asked to speak at many community and political events. Additionally, she created her own YPL project: a poetry workshop that she teaches every Tuesday at Santa Clara Juvenile Hall.

Yeh was inspired to focus on decarceration and restorative justice for her YPL project after volunteering with the Prison Journalism Project (PJP), an organization that transcribes and publishes the creative writing and journalism of incarcerated individuals across the nation, during her junior year.

Yeh explained that the “gatekeeping” within discourse about mass incarceration is problematic because “there’s no way to solve a problem unless we listen to the voices of people who are directly affected.” Through the workshops, Yeh hopes to help amplify the voices of the incarcerated young people.

In October, she received a $5,000 grant from Yerba Buena Center for the Arts and secured a publishing deal with The Hawkins Project to publish an anthology of the incarcerated youths’ poetry. Now, Yeh is launching a national call for submissions for poetry from incarcerated or formerly incarcerated young people.

Another project Yeh is working on is with founder and first violinist David Harrington of the Kronos Quartet; Brian Foo, who was an artist in residence at the Library of Congress; and Wu Man, a Chinese pipa player. The three are curating an immersive arts and music exhibit which traces the lineage of the Chinese American diaspora in the U.S. for the Kronos Festival scheduled to occur on April 7-9 at SF Jazz.

Starting out and sources of inspiration

Yeh was on what she called “a YouTube deep dive” in 8th grade when she stumbled upon a poetry channel, Button Poetry, which showcases a wide array of poets and their works. The channel kickstarted Yeh’s interest in poetry. She later found Youth Speaks, a San Francisco-based organization that challenges youth to advocate for social change through poetry.

While she had studied poetry in school, it hadn’t sparked her interest because it seemed “unrelatable.” “Before I found those videos, poetry seemed distant,” Yeh said. “It was so cool to see how people could deliver performance poetry and transform it into this living, breathing thing that was so applicable to our social situation,” she said, referring to the post-2016 presidential election time period.

In terms of her creative process, Yeh is often inspired by journalism that “creates powerful mental images,” whether it be works published by other news outlets or stories she writes for The Falcon, as in “An Ode to Teenage Girls.”

“Journalism and poetry go hand-in-hand since the end goal of both, at least for me, is very similar: at the end of the day, they’re vessels for me to use in order to amplify the story of a community or issue I care about,” Yeh said.

She said she typically writes in bursts at least once a week, though she hopes to gain more discipline and write more consistently.

Other achievements in poetry

One of the more political works she has penned addressed Andrew Yang’s controversial April 2020 opinion editorial for The Washington Post, “We Asian Americans are not the virus, but we can be part of the cure,” in which Yang proposed that Asian Americans “need to embrace and show our American-ness in ways we never have before” to combat the anti-Asian sentiment prevalent at the height of the pandemic. Yeh’s poem, “On the Back Porch,” opposed Yang’s editorial and “satirized the plight of the Asian American,” instead advocating for Asian Americans to speak up in order to gain respect.

Around the same time, Stanford University was partnering with the Kronos Quartet, a performing arts organization, to film a documentary on how the arts and poetry intersect with social justice. Yeh’s poem was selected to be included in the documentary.

Yeh’s additional accomplishments include being chosen as a 2020 National Student Poet Program Semifinalist and receiving a 2020 YoungArts Honorable Mention in Spoken Word. Her works have shown up in a number of publications including the International Congress of Youth Voices 2019 “What We Seek” Anthology and the YouthSpeaks 2021 “Between my Body and the Air” Anthology.

Starting with those YouTube videos, Yeh has learned to love the accessibility of poetry.

“A lot of the times when people learn or talk about social issues, it’s not as digestible, shrouded in a lot of academic language or academia that isn’t accessible,” Yeh said. “But since a lot of poetry is sharing your personal experience and is contingent on vulnerability, there’s a lot of emotion, [which anyone can understand]. Because it’s readily, emotionally accessible, anyone can feel invested in your poem and in turn invested in the issue you’re talking about.”

Looking back: Nearing one year of being YPL

As her YPL term comes to an end, Yeh reflected on her experience and said before she became YPL, she had always wanted to work with incarcerated young people but “didn’t really think it was possible.”

Yeh said her experience as YPL has shifted the way she thinks about poetry, from being an individual activity to a community-based one.

“When you are a YPL, a lot of the time people will invite you to speak at events, so you’re in a lot of writing spaces you normally probably wouldn’t have ventured into or wouldn’t have known about. You’re also getting more immersed in the poetry community and the people aspect of poetry,” Yeh said.