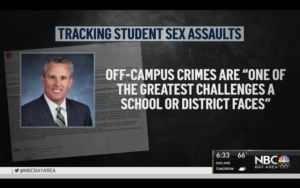 Permalink
Similarities cited between the way the district dealt with the Audrie Pott case and the LGHS #MeToo Movement.

Mia Lozoya, a former student at Los Gatos High School, shared these words during the “NBC: We Investigate” special, along with her sexual assault story in a two-part report aired on April 29. Along with Lozoya, another former LGHS student Lyssa Broomfield also spoke during the special, saying the school didn’t provide a safe space for survivors. This toxic environment resulted in both Broomfield and Lozoya leaving the school.

The special explored the sexual assault allegations the district has dealt with in its two schools.

Reporter Candice Nguyen, the lead investigator for the NBC story and a multiple time Emmy and Murrow awards winner, told The Falcon that she began looking into the story last fall when a member of the NBC Bay Area team shared a documentary created by LGHS students.

“Someone said, ‘Hey, have you seen this documentary?’ It was a student produced documentary on Instagram,” Nguyen said. “It stuck out right away and the subject matter was — and is — disturbing.”

The documentary led Nguyen to the @metoo.losgatos, formerly @metoolghs, Instagram account. After looking through the page, Nguyen began digging deeper.

Lozoya, who was a freshman when she was assaulted in February 2020, posted her experience on Instagram in June of that same year. Her post inspired hundreds of students from the district to share their stories, inciting what came to be known as the LGHS #MeToo Movement and the creation of two instagram accounts, @survivorstosurvivors and @metoo.losgatos.

The special deals with the complicated issue of out-of-school sexual assault allegations. LGSUHSD’s policies state that the school is not able to act if the attack happens out of campus, unless, according to Title IX, it has a “subsequent impact at school.”

She learned that, while the policies differ for many of the K-12 schools in the Bay Area, most have similar regulations to LGSUHSD, citing California’s Education Code, which states that “school’s can only discipline students for school-related misconduct.”

The NBC special also sheds light on the controversial way the district handled sexual misconduct allegations, with many claiming that the district didn’t hold the alleged assailants fully accountable.

After reporting her assault to officials, the administration didn’t punish the boy Lozoya said assaulted her; instead, they changed Lozoya’s schedule so that she no longer had classes with him. But it wasn’t enough.

“It just got to a point where I started to see him too often,” Lozoya said. “It was too hard to be there.”

Eventually, Nguyen’s reporting led her to see parallels between the #MeTooLGHS movement and Audrie Pott’s sexual assault and subsequent suicide in 2012.

Pott was a sophomore at Saratoga High School who committed suicide after being sexually assaulted by three SHS students who took pictures of her naked body while she was passed out and spread them around school. The three assaulters were not suspended or expelled from SHS.

“As journalists, we felt that the family of Audrie Pott had very valid concerns about his handling of the investigation,” Nguyen said.

Sheila Pott, Audrie Pott’s mother, also spoke to NBC about how the school district handled her daughter’s case “terribly” and how it set a precedent for how consequences for sexual assault were dealt.

“It was a terrible example letting the boys stay on campus,” Pott said in the report.

In the aftermath of the LGHS #MeToo Movement, the administration has hired a Title IX coordinator, Megan Farrell. Nguyen said that, despite top district officials declining an on-camera interview with NBC, they answered all the questions she had in writing.

The district did release a pre-recorded video with Farrell speaking on the NBC special addressed to students and parents, stating that they aimed to be “transparent with the public while fulfilling [their] legal and ethical obligations to protect [their] students’ privacy.”

Nguyen said the most challenging part of investigating the issue was that it dealt with sexual assault, especially with minors. While investigating and putting the story together, Nguyen was constantly thinking about the long-term impact that broadcasting the story would have on students involved.

“It was important that we shine a light on this issue, but this is dealing with real people, real girls who were only 16 years old at the time. They may feel one way [about having their story out there] now, but will they feel the same way at 25? And 35? It kept me up at night,” Nguyen said.

To make sure that the students who were a part of the broadcast weren’t being forced or pressured into sharing their stories, Nguyen made “dozens of calls and texts” with the students before even putting any of their conversations on the record.

The day after the special ran, superintendent Michael Grove released a message to students inviting them to join discussion groups to talk about the details of the special.

“We know that the NBC report from last night highlighting our district caused concern among members of our community.  We want to provide students with the chance to meet and discuss the impact of last night’s episodes,” he said.

The discussion groups, led by Restorative Justice consultants Duke Fisher and Toni McMurphy, were established to allow students to voice their opinions on the matter and “move forward in healing our community.”

The district has also taken action by launching independent inquiries, adding a tip line and expanding counseling services for survivors.

“The truth is we take the issue of sexual assault and sexual harassment very seriously,” Farrel said in the video to the community. “For that reason, we have invested and will continue to invest in resources and educational efforts that allow our students to be safe and empowered.”