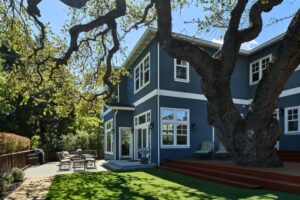 Photo by courtesy of Diana Ye
A house in San Jose, built around a large tree, was devalued several hundreds of thousands of dollars due to the potential problem it posed for future homeowners.

Permalink
Strict regulations regarding the removal of trees have inconvenienced many homeowners, yet they have made Saratoga a greener city and have contributed to its high property values.

When former girls’ cross country coach Danny Moon moved from San Jose to Saratoga in 1988, he remembers being shocked to see “trees everywhere.”

Trees line the road on Saratoga Avenue for miles; they act as fences for houses; trees fill the landscape along the SHS track.

The abundance of trees in Saratoga is at least partly because of its status as a Tree City, USA and the strict regulations against the removal of trees that come with the designation.

As one of over 3,200 Tree Cities across the nation, Saratoga provides at least $2 per capita — which amounts to approximately $62,000 in total per year — for the maintenance of trees and the Arbor Day foundation,  a nonprofit organization with over a million members dedicated to planting trees. Saratoga’s tree regulations aim to provide a sustainable urban forest and balance the rights of property owners with basic standards for the maintenance, removal and replacement of trees.

According to the city’s Community Development Department, the property values are “closely tied to the rural attractiveness of the city, much of which can be attributed to the trees.” In fact, the number of trees in a community has become an indicator of wealth since the 1970s. It’s no surprise, then, that Saratoga would impose strict regulations about tree removal.

In Saratoga, homeowners must first submit an application for a permit that lists the number and location of each tree to be removed, after which a city arborist will make a report based on a number of factors, such as its condition, the topography of the land and the necessity of removing the tree. After the city’s arborist submits the report, the community development director accepts or denies the tree removal application.

Afterwards, a notification is given to residents within 150 feet of the property, and if there are no objections, the removal may happen. This step may be skipped if a dead tree is being removed. Tree pruning of more than 25% of a tree requires a permit as well, although a notice to neighbors is not required.

Critics of this process say denying an application for removal can pose a greater threat than reduced aesthetics in a neighborhood and point to the dangers posed by falling trees or trees whose roots undermine nearby structures.

Trees, of course, provide shade, add beauty and help tackle climate change. The abundance of greenery from trees provides a multitude of benefits for cities’ environmental health, according to Los Altos resident Marta Wilde. Though Los Altos is not a Tree City, USA, it shares many tree regulations with Saratoga.

Wilde said she believes trees are one of the ways to address climate change.

“Climate change will impact my children, so it’s been on my mind for the past few decades,” she said. “Our climate situation is like a 1,000-piece puzzle, and there are all these components that need to come together to solve it. Trees are just one piece of the puzzle, and it’s something that anyone can easily [plant].”

Trees absorb carbon dioxide and reduce pollutants in the air, making for a cleaner local atmosphere and reducing greenhouse gases, which contribute to the warming of Earth.

Additionally, trees also help reduce the chance of floods and intensity of heat waves. Wilde said the tree canopy provides valuable shade that aids in the distribution of water, preventing the pooling of water during rain and reducing flooding.

She cited the recent heatwave across the Bay Area as an example of a problem that could be mitigated with more trees in communities. To help residents learn more about areas in the city more prone to high heat, the San Francisco community mapped heat islands around the city — areas where temperatures are a lot higher than surrounding areas.

“These islands cause heat illness, which can kill people, especially elders. If there are no trees, more heat islands will appear,” Wilde said.

Wilde said she noticed a large difference in the number of trees in her city and surrounding cities, especially San Jose.

“Even as a kid living in the Bay Area, I remember seeing all these trees and really loving the environment and the lushness,” Wilde said. “Driving to areas like San Jose and seeing all the cement just didn’t feel as welcoming.”

Although Wilde fully supports the regulations that help maintain trees, she admits there are good reasons for exceptions to strict policies for tree removal: Wilde recalled having to remove three large trees in her front yard that were impeding plans to create a driveway during a remodel.

While she and her husband cut down three trees in total, the couple planted 20 more to replace them, with some in the yard and the rest along the fences. The trees were planted away from problematic areas such as development and plumbing.

“We felt horrible taking down those trees,” Wilde said. “I told my kids: Each of those trees took 30 years of growth to become big, beautiful trees, and it takes us only 20 minutes to knock it down. So every time you remove a tree, there should be a lot of consideration whether you need to do it.”

Wilde is strongly against the mass removal of trees, such as clearing a large lot of land to develop property, but supports the strict removal of individual trees that compromise safety.

Currently, Saratoga offers a list of native trees, including redwoods and oaks, as a replacement for trees that are cut down. These trees must be consistent in value and a similar species as  previous cut-down trees. If a new tree cannot be accommodated, homeowners can plant trees off-site or make a payment to the City Tree Fund. Trees are valued based on the size of the tree, as determined by the arborist.

However, Wilde believes that the city gives “outdated” information about which trees are suitable as replacements. For example, redwoods need coastal fog to survive and are not native to areas far from the coast, like Los Altos and Saratoga.

“We need to reconsider what we plant; we need to rethink the list of species that do well in this area,” Wilde said. “I’m not an arborist, but why can’t we look to Arizona, [which has similar soil compositions to California], and see what grows well there?”

Another supporter of Saratoga’s tree city regulations is Moon, who fell in love with trees as a child, when he would spend much of his freetime in forests making campgrounds with his friends.

“When we were kids, we used to ride our bikes wherever we could go, so I often rode out into the Santa Cruz [a tree city] mountains,” Moon said. “Our campground was littered with trees, and they were great for putting a rope on and swinging into the river.”

As an avid lover of trees, Moon supports the city’s strict regulations prohibiting their removal, referencing their ability to provide shade and help clean the surrounding atmosphere. Rather than cutting down trees, he offers a simple solution: Build around them.

“You don’t have to make a clear cut to make a building,” Moon said. “You can just build around them. It’s not an unreasonable request; it’s just that a lot of developers want to build real fast and cutting everything makes building faster.”

Moon has seen how Saratoga’s tree protection policies have had positive effects, especially since residents must replant two trees for each one removed. Hence, the city loses little greenery. For example, only 39 trees were removed in the 2020-2021 school year, while 436 trees were pruned, an alternative solution that requires a much less arduous approval process.

Despite their importance to Saratoga property values, tree regulations can compromise homeowners’ safety

According to South Bay real estate agent Diana Ye, the abundance of trees in Saratoga neighborhoods contributes to its rural feel and is one of the main reasons why it is such a desirable city to live in.

She said properties with large heritage trees typically sell for 3% to 15% above those without them. However, the placement of trees is also important: Ye cited the $200,000 decrease in price of a $2.5 million Cupertino home due to the close proximity between the house and a large oak tree.

The debate between removing trees and ensuring residential safety is a common problem for homeowners like MaryAnn Shiosake, who moved to Saratoga in 1988.

The roots of a Southern Magnolia in her backyard started creating cracks and ground elevation in the front walkway and driveway 10 years ago. Shiosake said her husband had to use a grinder to ground down the driveway so nobody would trip over it.

Despite supporting the protection of trees and being an active member of the Arbor Foundation, Shiosake still wishes to have the tree cut down. She has contacted the local arborist multiple times, but due to the expensive fees and complex and lengthy regulations, she hasn’t been able to have the Southern Magnolia removed yet.

For resident Jean Lundeen, the danger that the trees pose in her neighborhood along Pierce Road is even more severe. Lundeen’s safety has been threatened by several oak trees with sudden oak death, a type of tree disease caused by a fungus-like plant pathogen that causes them to unexpectedly fall over. As of September, five of six trees have fallen in her neighborhood.

In 2000, a sick oak tree brought down the power lines of a 100-year-old barn, which caused dangerous sparks. Later, another oak tree fell over and hit a car. The driver barely escaped without getting injured.

Common symptoms of sudden oak death include small mushrooms growing along the base of the tree, browning or wilting leaves, and bleeding from the tree trunk. However, the tree is often dead before the homeowner notices and contacts an arborist, Lundeen said.

While most of the dangerous oak trees near Pierce Road have fallen since then, a few of them are still growing and homeowners haven’t been able get permission from the city arborist to cut them down:  According to Lundeen, if the arborist can’t determine whether a tree has sudden oak death, they will recommend not cutting it down.

When asked to comment, the city said residents could submit samples of the tree for free to UC Berkeley’s SOD Blitz Project, which tests samples from residents and posts a map of positive and negative cases.

Despite the potential harms caused by the oak trees, Lundeen still believes that the strict protection for heritage trees adds value to Saratoga’s homes and environment.

“I think we should try to keep all the healthy trees alive,” Lundeen said. “But people should be allowed to replace certain trees that compromise their safety.”