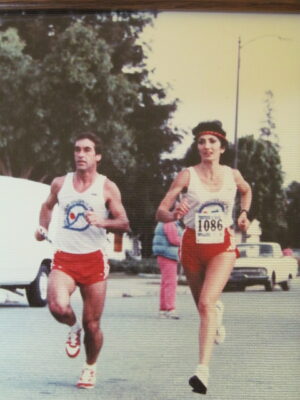 Danny Moon bringing his wife Madelyn in as she is finishing her 10k race, two weeks after they both completed the Boston Marathon in 1988.

Over six decades ago, girls’ cross country coach Danny Moon, now 74 and a current resident of Saratoga, began a job that would spark his lifelong passion for running.

Growing up in Santa Cruz, Moon was a paperboy who delivered papers at 4 a.m. in the morning all over town.

Every morning, Moon would ride 12 miles to the eastside of Santa Cruz near Ocean Street near Marianne’s ice cream parlor and back on his bicycle. Then, he would continue cycling through the Santa Cruz Boardwalk area and then downtown, delivering dozens of papers along the way.

The stamina, persistence and determination he developed in elementary school laid the foundation for his future as a long-distance runner.

Prior to high school, Moon never thought of pursuing running as an extracurricular. It wasn’t until then-president John F. Kennedy established a fitness education program that mandated a 1-mile requirement during his sophomore year at Santa Cruz High School in 1962 that he ran his first ever mile — with a time of 5:45.

Seeing Moon’s talent, his school’s cross country coach encouraged him to join the team. Despite only being 4 feet 10, Moon quickly advanced to the varsity team.

During his years of high school, Moon took on many ambitious runs, some of which he jokingly describes as “not very smart.”

In one, Moon and his friend decided to run 50 miles from Santa Cruz to Monterey on Highway 1 without telling their parents, leaving his house at 6 a.m. and arriving 12 hours later in Monterey.

“We got in trouble because we got to [the bus stop we planned to catch] 10 minutes late, so we missed it and our parents had to come and get us,” Moon recalled.

After high school, Moon continued to run on his own, despite pursuing careers as a manufacturer engineer, inventory specialist and tech writer. At age 36, Moon ran his record mile time of 4:35. He reached his peak in his late 30s and mid-40s, running a total of 128 sub-5 minute miles in 26 consecutive years until his last one at age 58.

Taking inspiration from Olympic marathoner Bill Rodgers, Moon also ran a total of 12 marathons, his last being the Boston Marathon in 1988. He achieved his personal record for the marathon at age 40, running the 26.3 miles in 2 hours and 59 minutes, a pace of approximately 6:50 per mile.

Since the ‘70s, Moon has also coached on and off in various running clubs. After retiring from Lockheed Martin, an aerospace company, he accepted the job to coach the school’s girls’ cross country team in 2008, becoming a mentor to the next generation of young runners.

Reflecting on his past, Moon noticed that the demographic of runners have vastly changed.

When Moon started running, girls were not allowed to participate in cross country. Over the years, however, he’s seen a significant increase in the number of girls participating in the sport.

In addition, Moon noted a great shift in his personal running mindset as he matured: While he used to focus primarily on speed, he now sees running as a lifelong habit to maintain his physical and mental health. Even at 74 years old, Moon continues to run between 12-15 miles per week and is capable of running a 7-minute mile. His hope is to pass this running habit on to young people, especially for those who don’t think they are runners.

“You’ll be amazed by how much you can run if you put the work in it.” Moon said. “I want people to take what they learn in cross country and carry it with them for the rest of their lives. After starting out in cross country, I’m still running. They can do that too.”