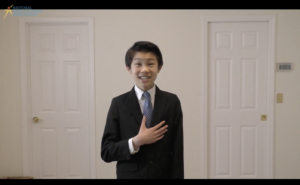 Permalink
Timothy Leung recaps his journey qualifying for Speech Nationals, along with his outlook moving forward

Leung’s journey to speech success emerged out of a love for acting, where during his middle school years, he often participated within school dramas and plays.

Seeking to explore a new type of acting, Leung made the decision to try Dramatic Interpretation (DI), where speakers reenact works of literature to the best of their ability. Additionally, Leung branched out into the Original Oratory (OO) format as well, which tests competitors’ abilities to compose and perform their own speeches.

Last year, Leung concluded his middle school journey with a double victory in both DI and OO of the Middle School Tournament of Champions, titles often dubbed the crown jewels of competitive speech and debate.

Now in the competitive speech varsity circuit, Leung has continued his success in DI, placing first in Stanford’s prestigious Palm Classic on Feb. 14. On March 13, he qualified to the California states competition in DI as the Coast Forensics League’s top seed and on March for National Speech and Debate Association (NSDA) Nationals in DI as the California Central Coast District’s second seed.

Leung attributes his success primarily to his practice routine.

“Preparing for tournaments can be quite challenging and frustrating,” he said. “Prior to competitions, I run through my speeches multiple times, perfecting every element from hand gestures to enunciation, in order to enable myself to perform as flawlessly as possible.”

Additionally, Leung emphasized the importance of choosing a speech that provides an emotional connection with complexity and depth. This year, following many weeks of deliberation, Leung settled on performing a version of “The Paper Menagerie” by Ken Liu after becoming entranced by its inspiring storyline.

On the surface, the short story is about a multiracial immigrant boy named Jack who loses his mother to cancer and must face the constant pressure to fit into “American” standards, rather than embracing his cultural roots.

The subtle Anti-Asian racism inflicted upon Jack by other characters is something Leung has seen firsthand. On a positive note, Leung believes that his own personal struggles and encounters with racism have truly allowed him to perform from the bottom of his heart and with genuine emotion.

“‘The Paper Menagerie’ strongly displays the emotion of remorse, which is incredibly hard to act out, but I found that drawing from my past experiences allowed me to pull it off,” Leung said.

Over the course of the past two years, the majority of speech and debate tournaments were held online due to COVID-19, and Leung strongly looks forward to traveling and competing in person again in Louisville for the NSDA national tournament in June.

He expects the in-person experience to be starkly different and has begun to alter his technique to better suit the environment, such as improving eye contact with the judges since it was not necessary during online tournaments.

To prepare for the in-person competitions, Leung has sought the support of coaches and fellow competitors alike, and they have aided his pursuit of his best performances.

“It’s been a fun journey, and given the awesome support the SHS speech and debate community has provided, I look forward to winning with the team,” Leung said.