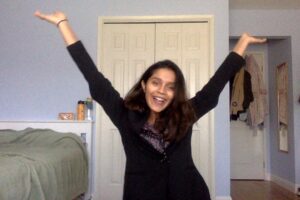 Junior Nandini Desai dons her suit to compete in the Yale Invitational speech and debate tournament on Oct. 4.

With an online tournament every weekend, the speech and debate club has a lot to figure out and little time to do so.

Junior Shravan Potluri had just woken up on Oct. 4 when he sat down in front of his computer and realized the first round of his event, Extemporaneous Speaking, at the Yale Invitational had finished. It was 9 a.m. and the preparation for his second round was underway.

As it turned out, the online speech and debate tournament was running on Eastern Time. Potluri’s event began at 9 a.m. E.S.T., or 6 a.m P.S.T., making him three hours late.

“I just felt stressed to high heaven,” Potluri said. “First, there was confusion, then there was the realization, followed by two minutes of panic before I composed myself and took the remaining 20 minutes to prepare a speech.”

Time difference issues have been far from the only challenges this year, with technical difficulties and other obstacles occurring regularly. Among the problems have been issues with camera angles and internet connections.

Junior Nandini Desai, who competed in Humorous Interpretation at Yale Invitational, also missed her first round and immediately joined her second round after waking up at 7:30 a.m. To her dismay, figuring out where to look during the online competition posed yet another challenge.

“It’s a huge problem because when you're used to making eye-contact with your audience when performing in-person,” Desai said. “But I had to look at the image of myself on the computer, which is a little weird.”

Since her event is focused on acting and delivery, Desai had to grapple with the technical issues that may hinder her performance. One such concern is the camera angle: She found that she performed most of a round with her head out of the camera frame. Other aspects include the lighting, the background noise and her own volume level.

“I keep running into little errors that wouldn't happen in person,” Desai said. “But the tournament organizers made the best of a bad situation.”

Aside from competition, one major loss of online tournaments is the lack of a synchronous awards ceremony, Desai said. For the Stephen Steward Invitational on Sept. 26, Desai placed fifth in Humorous Interpretation, but was disappointed to find that the awards ceremony was merely an asynchronous YouTube video.

The video lacked the fun and exciting culture characteristic of in-person speech and debate tournaments, Desai said. She misses the atmosphere of nervousness and anticipation, with all competitors clapping and cheering their friends on. In an online format, she finds it hard to know her friends’ results because she was simply trying to find her own event in the 8-minute awards video — significantly shorter than the usual hour-long ceremonies due to the lack of applause.

On Sept. 11, sophomore Anushka Sankaran competed in Public Forum Debate at the Grapevine Classic. In this case the biggest issue was with NSDA Campus, a platform similar to Google Meets and Zoom that was developed by the National Speech and Debate Association for holding online tournaments.

“It kept disconnecting people, and then you could only reconnect after 30 seconds, before it kicked you out again,” Sankaran said. “It would make a new video tile for you and keep the frozen version of yourself on there — that was really funny to watch, especially if someone froze in a weird position.”

Because of the connectivity issues, the tournament called for a re-do for Round 1 before taking three or four hours to fix the NSDA Campus, Sankaran said. On the second day, the platform broke again, so the tournament had to push the schedule back and cancel a number of rounds.

But despite the frustrations and the loss of competitive atmosphere, students have recognized some benefits to the online format.

Desai found upsides to the tournament set in a familiar location. She felt that online tournaments allowed for more leniency — she could time herself during her speech — and less pressure. For speech, the tournament ran more smoothly than it would in-person, with no delays between rounds.

Another benefit of the online format is that students from all across the country have the ability to compete, regardless of income or time constraints.

“Because I'm in my junior year and the workload has picked up, I think if Yale Invitational was in person I might not have had time to go,” Desai said.

Sankaran said she felt more confident speaking online because it was more comfortable to be sitting in her room in a familiar environment. She could also wear sweatshirts and normal clothes rather than having to follow a formal dress code.

Sankaran also said that online tournaments are more accessible for people in low-income areas who could not afford to travel.

Sophomore Arnav Garg, who broke to double octofinals in Lincoln-Douglas Debate at Yale Invitational, said that due to the tournament being online, there were debaters from all over the country as opposed to just one region. Because each region’s competitors have a different style of argumentation, he said, the experience was more interesting and educational.

Sankaran believes that the online format may even become the future of debate tournaments.

“Although I don't know if I would like that or not because of the technical problems, I think it might end up staying like this forever,” she said.